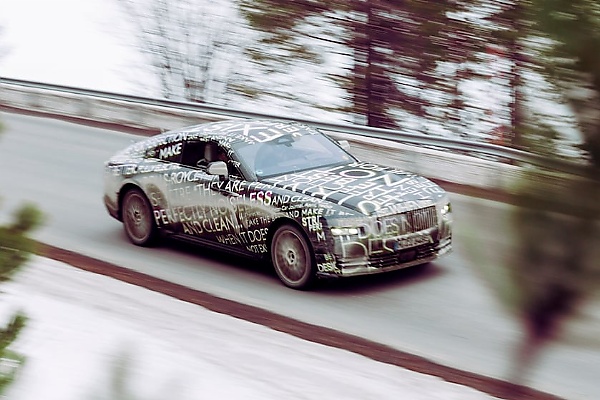 “The announcement of every new Rolls-Royce motor car carries a great weight of expectation, but Spectre is unquestionably the most anticipated product in the marque’s modern history. This is because it is much more than a product. It is a symbol of our bright, bold electric future, and it represents a seismic shift in our powertrain technology.

It is for this reason that we have created a testing programme that is as significant and historical as Spectre itself. The extraordinary undertaking of educating Spectre to think and behave like a Rolls-Royce will cover 2.5 million kilometres, which is a simulation of more than 400 years of use for a Rolls-Royce. Today, I can confirm that 25% of this journey is now complete, and the results have met our most ambitious expectations.” Torsten Müller-Ötvös, Chief Executive Officer, Rolls-Royce Motor Cars

“Refining the all-electric drivetrain that underpins Spectre challenges the very definition of engineering. The departure from internal combustion engines allows us to significantly increase the processing power of our individual components and create a Decentralised Intelligence. We refer to this unprecedented era, where we benefit from a multi-control, multi-channel and highly interconnected electronic and electric powertrain architecture, as ‘Rolls-Royce 3.0’.

“Our task is to teach each component and system how to think, behave and communicate like a Rolls-Royce, which sees much of the engineering pivot from workshops into the digital space. Here in Arjeplog we have built a significant foundation on which we will create a true Rolls-Royce. This is a big step forward for our brand, but also for electrification – even though Spectre is in its infancy, I can confirm that the technology is able to contain the Rolls-Royce experience.”Mihiar Ayoubi, Director of Engineering, Rolls-Royce Motor Cars 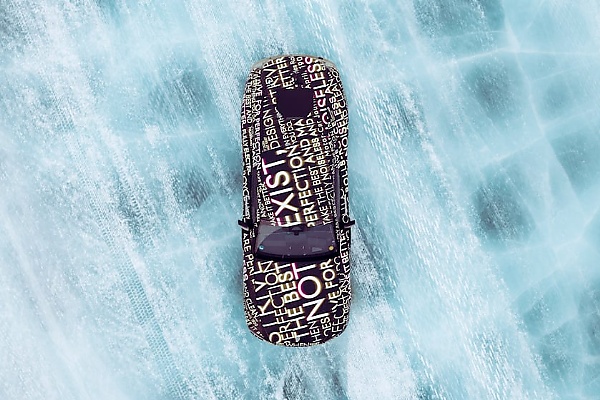 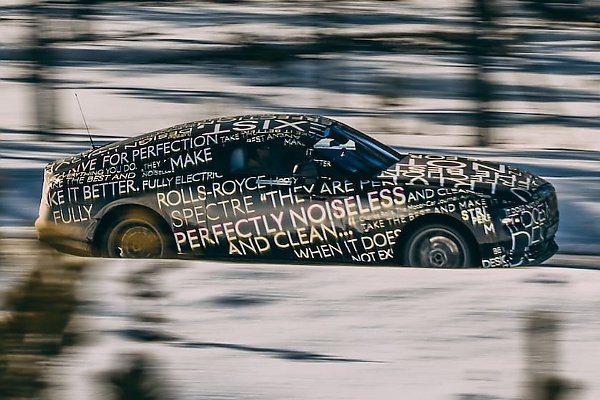 In September 2021, Rolls-Royce Motor Cars made a historical announcement that it would launch its most important product since 4th May 1904, when the marque’s founders Charles Rolls and Sir Henry Royce agreed that they would create “the best car in the world”. The Rolls-Royce Spectre.

While Rolls-Royce has built a reputation for creating what is regularly described as “the best cars in the world” using internal combustion engines, the idea of electrification is something that is familiar to the brand. Henry Royce began life as an electrical engineer and dedicated much of his life to creating internal combustion engines that simulated the characteristics of an electric car – silent running, instant torque, and the sensation of one endless gear.

Yet, the connection with the marque’s founders is far deeper. When Charles Rolls drove a 1900 electric car named the Columbia, he made a prophecy: “The electric car is perfectly noiseless and clean. There is no smell or vibration. They should become very useful when fixed charging stations can be arranged”. Spectre is the fulfilment of this prophecy.

Spectre also represents a promise kept. In 2011, Rolls-Royce showcased a fully electric Experimental Phantom concept named 102EX. This was followed by 103EX, a dramatic design study that anticipated a bold electric future for the marque. These experimental cars prompted significant interest from Rolls-Royce clients. They felt that the characteristics of an electric powertrain would fit perfectly with the brand. Rolls-Royce Chief Executive Officer, Torsten Müller-Ötvös, responded to this with an unambiguous promise: Rolls-Royce will go electric, starting this decade.

In September 2021, Charles Rolls’ prophecy and Torsten Müller-Ötvös’ promise led to a historical moment. Rolls-Royce confirmed that it had commenced testing of the first all-electric Rolls-Royce in history, Spectre. This extraordinary undertaking would be the most demanding testing program ever conceived by Rolls-Royce. It would span 2.5 million kilometres, simulating more than 400 years of use for a Rolls-Royce, on average. 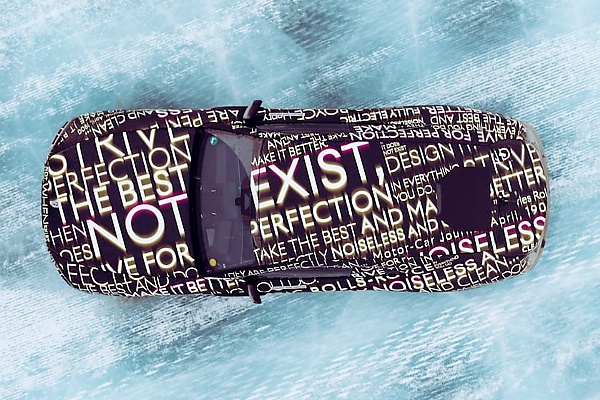 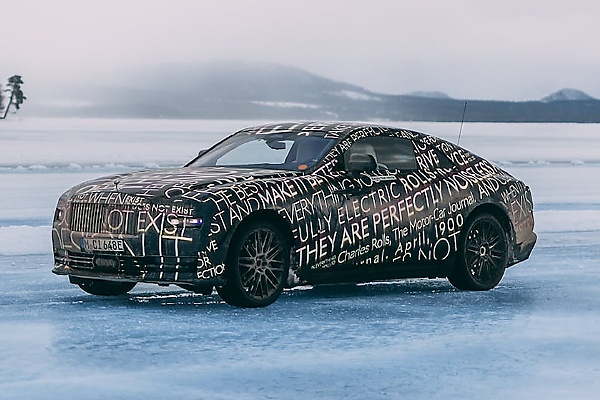 A new Rolls-Royce motor car always begins its life in winter. Temperatures at the Bespoke facility used by the marque, located in Arjeplog, Sweden, just 55km from the arctic circle, drop to -26 degrees centigrade and are further cooled to -40 degrees centigrade.

There are several reasons for subjecting the marque’s products to such extremes. When the first prototypes are built, engineers perform very basic tests in extreme conditions to ensure that each system is operational and functions at a basic level in a cold-weather environment. This test is combined with the beginnings of the refinement process – the first ‘lessons’ in a finishing school that will form the foundations of a motor car worthy of the marque.

This begins with processes that are common to the automotive industry such as noise, vibration and harshness tests. The variables that affect this are manifold, spanning from the materials selected for major hardware components to the density of the door rubbers, bushing compounds, fastening materials and even properties of bonding agents. The performance of these variables can change considerably when subjected to extreme temperatures – likewise the efficiency of the motor car’s heating, ventilation, air conditioning and cooling systems.

As a true luxury brand, there is an additional component of winter testing that is of great importance to Rolls-Royce. The marque’s engineers define this as ‘de-escalated time’, which enables incredible accuracy and control in creating the Rolls-Royce experience using Spectre’s chassis control systems, powertrain management and electronics control.

By driving on low traction surfaces such as snow and ice and wilfully destabilising Spectre, the engineers can create dynamic circumstances at low speeds that would ordinarily occur at high speeds. This can be reviewed and guided in situ and in slow motion, in doing so parametrising and finessing cold-weather vehicle performance in areas such as handling, controllability, stability, predictability and the ‘waft ability’ that defines the Rolls-Royce experience.

De-escalated time enables engineers to create unparalleled detail in the motor car’s response, in doing so schooling Spectre to think, behave and communicate like a Rolls-Royce worthy of the marque. Following more than half a million kilometres of testing, 25% of this process has now been completed.

Rolls-Royce 3.0 represents the beginning of the marque’s bold electric future. The term ‘Rolls-Royce 3.0’ is a reference to the brand’s progress during its renaissance, which began in Goodwood, West Sussex on 1st January 2003. The first Goodwood Rolls-Royce was Phantom, and it was underpinned by its own Bespoke architecture. This was Rolls-Royce 1.0. Following this, a new, highly flexible all-aluminium spaceframe architecture was conceived that could be adapted for multiple applications, including the current Phantom, Cullinan, Ghost and Coachbuild projects. This was Rolls-Royce 2.0. Rolls-Royce 3.0 is the integration of a fully electric power train and Decentralised Intelligence into the marque’s architecture.

In component terms, the simplicity of the car has increased significantly. However, the requirement for engineering Spectre – of sending this uneducated car to Rolls-Royce finishing school – is unparalleled. The definition of engineering has changed. Historically, engineering a Rolls-Royce has taken place in workshops. Spectre sees this pivot into the digital space.

The dramatically increased intelligence of Spectre’s electronic and electric powertrain architecture enables a free and direct exchange of detailed information between these 1,000+ functions with no centralised processing. While this has required engineers to increase the length of cabling from around 2 kilometres in existing Rolls-Royce products to 7 kilometres in Spectre and to write more than 25 times more algorithms, it offers a significant step forward for the brand. A dedicated control can be created for each set of functions which enables unprecedented levels of detail and refinement, allowing for what Rolls-Royce chassis specialists are already calling “Rolls-Royce in high definition”. 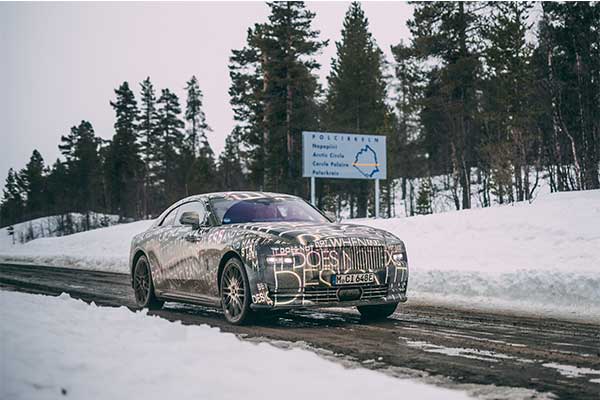 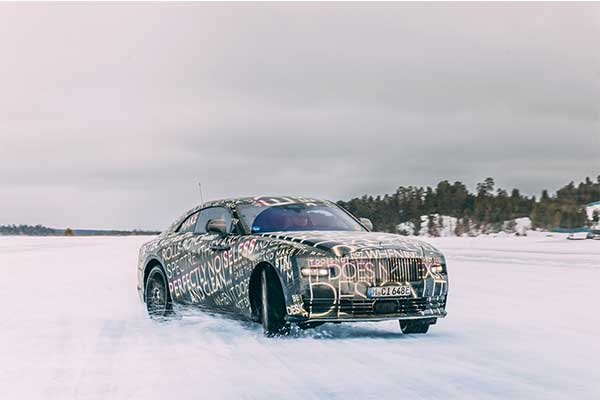 In creating a design for Spectre, a generously proportioned, highly expressive body style was selected. This could only be enabled with the marque’s all-aluminium spaceframe architecture. Indeed, the scale is so far beyond other contemporary coupés that it has been designated an Electric Super Coupé. It is the brand’s belief that there is only one other contemporary product that occupies this space – Phantom Coupé. The marque’s designers consider Spectre to be Phantom Coupé’s spiritual successor.

Indeed, when it came to styling Spectre, the marque’s designers considered the dimensions and emotionality of Phantom Coupé and other grand coupés from Rolls-Royce’s past. Not only did they create this emotion with Spectre’s fastback silhouette and size, but they also carried forward a key design feature of Phantom Coupé: the iconic split headlights, a design tenet that Rolls-Royce has owned for many decades.

This design typology was selected in consultation with the marque’s clients, who found the idea of a Phantom-scale Electric Super Coupé highly appealing. However, the decision to pursue this aesthetic was also strategic. Leaders within the brand wanted the first fully electric Rolls-Royce to be highly emotional, something that shows that electric powertrain technology can deliver on the promise of such grand, seductive and compelling styling. While Spectre represents a historical moment for Rolls-Royce, it is also a historic moment for electrification – the technology is now able to contain the Rolls-Royce experience.

The flexibility of Rolls-Royce’s proprietary architecture, which is reserved for the marque’s exclusive use and does not underpin mass-market cars, enables the exterior design to carry the scale required to create the presence of an authentic Rolls-Royce. This is plain to see in Spectre’s wheel size – it will be the first coupé equipped with 23-inch wheels since 1926.

The flexibility of the marque’s architecture also enabled designers to dramatize the coupé experience. By placing the floor halfway between the sill structures rather than on top or underneath the sills, there is a highly aerodynamic channel for the battery, providing a perfectly smooth underfloor profile. Likewise, this creates a low seating position and enveloping cabin experience.

By moving the bulkhead location, designers and engineers have also been able to deepen the dashboard location to truly cocoon passengers. This is amplified with a dramatically low windscreen rake and incredibly efficient airflow profile. This, along with other intelligent design solutions such as an aerodynamically tuned Spirit of Ecstasy mascot, contributes to a drag coefficient (Cd) of just 0.26 in early prototypes.

The battery location, which is enabled by the marque’s architecture, unlocks another benefit that is commensurate with the Rolls-Royce experience. By creating wiring and piping channels between the floor of the car and the roof of the battery, engineers have created a secondary function for the battery – 700kg of sound deadening.

With the winter testing phase completed, Spectre will continue its global testing programme. The Electric Super Coupé still has to complete nearly two million kilometres before the marque’s engineers will consider this undertaking complete prior to the first customer deliveries in the fourth quarter of 2023. 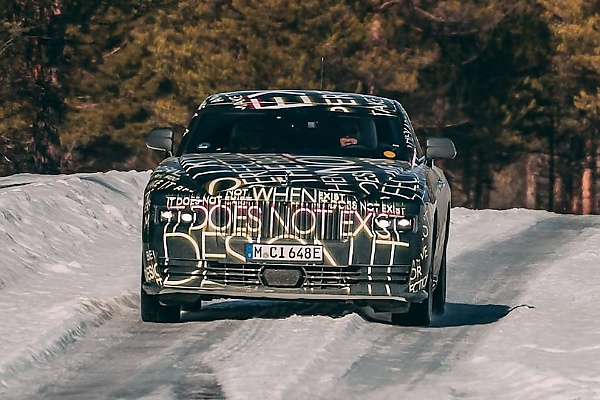 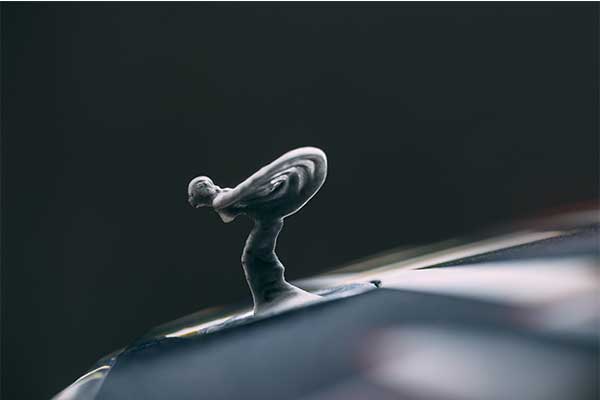