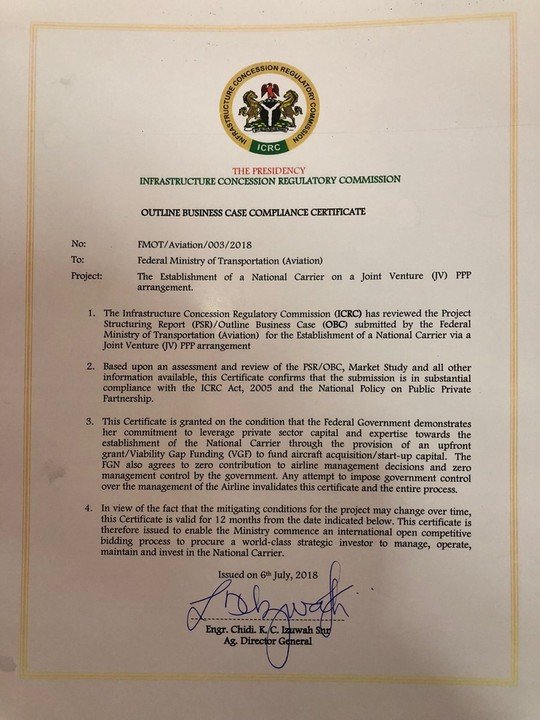 The proposed national airline for Nigeria would be unveiled before the end of the year, the Minister of State for Aviation, Hadi Sirika, has confirmed.

Mr Sirika, a former pilot, gave the assurance while receiving the Outline Business Case Certificate of Compliance for the establishment of the airline from Chidi Izuwah, the Director General, Infrastructure Concession Regulatory Commission (ICRC).

The minister said that the presentation of the certificate was a testament on how far the project had gone.

The proposed airline will gulp $8.8 million preliminary cost and $300 million as take-off cost.

The Nigerian government is not fully funding the airline as it has adopted midwifing it via the option of a Public Private partnership, to deliver a national carrier that would stand the test of time and be world class in operation and management, he said.

According to Mr Sirika, Nigeria will receive the first set of five airplanes for the airliner on December 19.

The airline will make profit in three years after operations, he said.

“We will make the investments and follow the business plan through private sector management.

“We intend to get a 30 aircraft market in five years. But we will begin with five aircraft on the day of lunch. It was not clear whether an order has been made for the aircraft, but the minister in May met a team from Boeing in Abuja.

“At Farnborough International Public Airshow coming July 18, 2018 in London, we will unveil the name, logo, colour scheme, the structure and the type of airplane about the national carrier.

“We will also place the order for the aircraft at the event,” he said.

Mr Sirika explained that the government would step in to cover the funding gap at the onset and ease out thereafter.

He said the government would not get involved in the management of the national carrier.

He said Nigeria’s population of over 180 million people is huge enough to support aviation, adding that the airline would take advantage of Bilateral Air Service Agreement (BASA) that the country has with over 70 countries.

According to him, it will also take advantage of the Africa Single Air Transport Market and will be the best player if the government gets it right.

“But if we don’t, it will become a threat to us. But I believe we are on the right track.

The minister also gave an assurance that the national carrier would not kill the domestic airlines operating in the country.

The Director General of ICRC, Mr Izuwah, said the presentation of the Certificate of Compliance was an official green light to proceed with the procurement process.

According to him, start up cost over the next three years is about $300 million, but pre-start-up is $8.8 million.

“The rest of the investment will be equity injection which will happen in tranches because you do not need all the monies at once.

External capital injection also depends on the profitability of the airline.

“Though, you need that initial government financial to make it take off, but what is important is that the national carrier will be entirely private sector controlled.

“There will be zero government interference. But if that happens, it invalidates the certificate and the entire process.

“This is a bankable business, and the government will get a strategic partner who will invest in the national carrier and when we get through the bidding process, more facts will emerge.

“The government will have to spend the pre-start up cost like the brand name, the office and other start up.

“ It will be a world class airline with domestic, regional and international operations,” he said.

2 Dead In A Multiple Accident In Imo State (Graphic Photos)