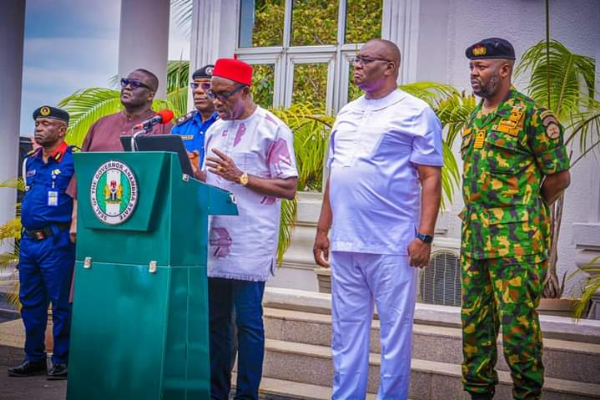 The ban takes effects from tomorrow, Friday, 26th May, 2022, until further notice.

Motorcycles, keke and shuttle buses are also banned from operating in these LGAs on Mondays.

The governor made the declaration in a state broadcast on Wednesday evening amid insecurity issues affecting the state.

Motorcycles, keke and shuttle buses are also banned from operating in these local governments on Mondays until the Sit-at-Home completely stops.

“Until further notice also, motorcycles, keke and shuttle buses are banned from operating in these local governments on Mondays until the Sit-at-Home completely stops. The youths of every community in the zone are hereby enjoined to assist the security agencies in the implementation of this policy and are mandated to seize any such motorcycle or tricycle on the spot.

“Local Vigilantes should report such motorcycles or tricycles (keke) immediately, and they will be confiscated by government and the owner prosecuted. The Okada, Keke, and shuttle bus union leaders must take responsibility to report their members who are involved in criminal activities.

“We shall review this after two weeks, and if members of these unions continue to be involved in criminal activities, the government will have no choice but to either disband the Unions and/or ban them out rightly in the state.

“No part of Anambra State (house, bush or forest) shall be used as camps for these criminals. Anyone with a gun in a camp is considered a criminal in Anambra State, and the government and people will work with security agencies to flush them out.

“The State Government shall pursuant to its powers under the Land Use Act revoke and acquire any land found to be harboring these criminals, for public purpose.

“Henceforth, every community is required to provide information on any part of their land occupied by these criminals as camps. If the community fails to do so, the government will take over such land.”

FAAN Debunks Reports Of Lagos Plane Crash, Says Aircraft Was Sold By The Owner To Buyer