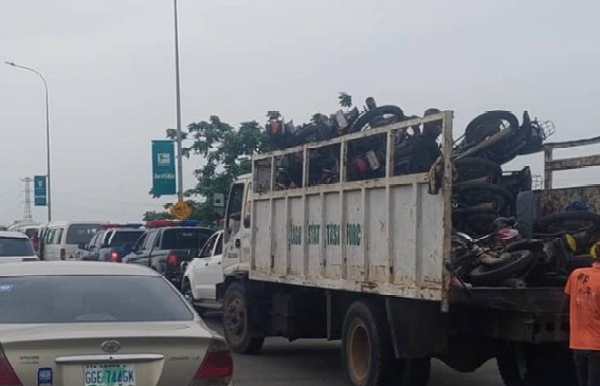 It says 115 motorbikes were seized for flouting the State Traffic laws by operating on restricted routes and plying the highways.

Says illegal businesses of Okada riders will no longer be lucrative if they refuse to comply with the laid down rules and regulations.

Following the recent killings of one Mr. David Omahi by suspected commercial motorcyclists, popularly known as ‘Okada’, the Lagos State Taskforce has continued with its enforcement exercise to rid the Lekki axis and the entire State of unscrupulous Okada operators, who have refused to heed several warnings concerning their illegal operations.

The Chairman of  Lagos State Taskforce, CSP Shola Jejeloye, stated this on Wednesday during a sting operation and enforcement exercise during which 115 motorbikes were seized for flouting the State Traffic laws by operating on restricted routes and plying the highways.

Jejeloye reaffirmed the Agency’s determination to curb the illegal activities of the operators, saying:

“This operation will be a continuous one, not just in Lekki but in every other part of the State. We will make sure that their activities are curtailed till they abide by the rules. They will never be above the law no matter how large their numbers are”.

CSP Jejeloye, however, appealed to Lagosians to join efforts with the State Government in ensuring that the fight to restore and maintain sanity on Lagos Roads is won collectively for the betterment of all who reside or visit the City of Lagos.

“Restoring sanity is not an easy task, neither is it a job for one man or the Agency alone. If we join hands together, we will achieve our desired goals of ensuring that no one takes the laws into their hands and gets away with it, especially not in a cosmopolitan city like Lagos”.

The Chairman promised to raid blackspots and hideouts of Okada operators within the axis and other parts of the State in the coming weeks to ensure that their illegal activities are terminated, stressing that the force intends to make the environment unconducive for any operator who has turned deaf ears to the warnings of the State Government.

He emphasised that the enforcement exercises, tagged ‘Operation Kogberegbe’, will be enhanced to put a stop to their shady activities in the State.

The Chairman further stated that the illegal businesses of Oakda riders will no longer be lucrative if they refuse to comply with the laid down rules and regulations, noting that they will be arrested and prosecuted with their bikes forfeited to the State Government via the Courts.