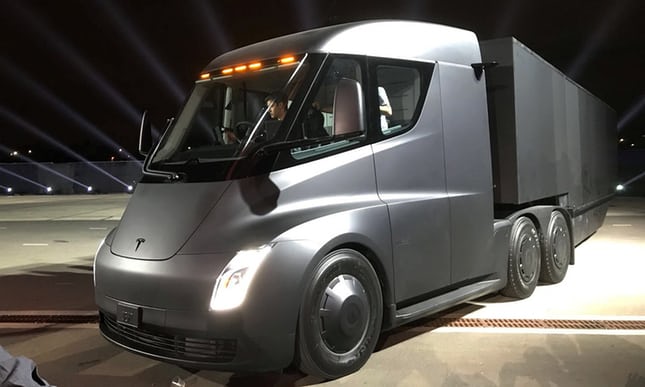 Tesla boss Elon Musk claims the super-safe truck is “impossible” to jack-knife and will have a 500-mile electric range (Diesel trucks are capable of traveling up to 1,000 miles on a single tank of fuel)

But it was the incredible Roadster 2 that stunned many. Musk claims the new Roadster 2 can accelerate from 0-60 mph in 1.9 seconds, go 0-100 mph in 4.2 second, and complete the quarter mile in 8.9 seconds. Numbers that will make it the quickest production car in the world.

…And the open top which has a lift off roof to store in the boot and four seats promises a staggering range of 630 miles from its 200kWh battery packs.

Musk said: “The point of doing this is to give a hardcore smackdown to gasoline/petrol cars.
“Driving a gasoline sports car is going to feel like a steam engine with a side of quiche.”

Musk also claimed it’d be “economic suicide” to continue with diesel trucks with convoys of the Tesla truck cheaper than shipping goods by rail.

It’ll be 20 per cent cheaper to own and run than a gas-guzzling diesel and the 500-mile range will be with a full load and at max motorway speeds.The semitruck also features “explosion-proof” glass, autopilot modes and lane-keep tech, according to Musk.

The Tesla Semi can go from 0 to 60 miles per hour in five seconds without cargo and reach 60mph in 20 seconds at the maximum weight allowed on US highways of 80,000 pounds.

Tesla will roll out a network of “megachargers” for the trucks to plug into to give them 400 miles in just 30 minutes. The truck is due to go into production later in 2019

Dodge Challenger RT Vs Ford Mustang GT! Which Would You Take?

15 Car Related Terminologies and their Explanations