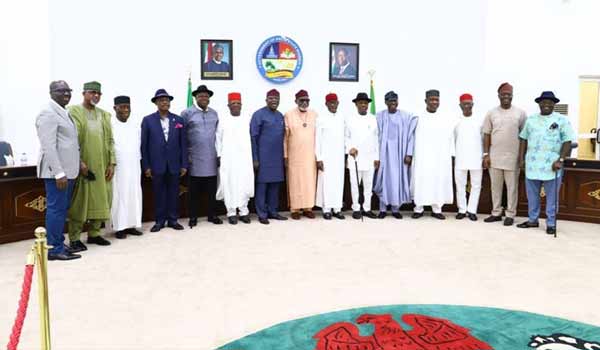 Southern Governors and Senators have expressed concern over the intractable gridlock along Oshodi-Apapa Expressway and Apapa ports environ, calling on President Muhammadu Buhari to put the issue on priority list and address the situation head-on.

The governors, under the platform of Southern Nigeria Governors Forum, made the call on Tuesday, at a crucial security meeting, held at the Government House, Asaba, capital of Delta State, which had 17 Governors in the South-West, South-South, and South-East geo-political zones in attendance.

The need for Buhari-led federal government holistic intervention in Apapa chaotic perennial gridlock was one of the resolutions contained in the communique issued at the end of the meeting.

Also, senators from the geo-political zones also supported the call by the governors in addressing Apapa gridlock which has been described as “National embarrassment.”

The governors, in the communiqué read by Akeredolu, affirmed that the people of Southern Nigeria remain committed to the unity of Nigeria on the basis of justice, fairness, equity, oneness, and peaceful co-existence between and among its people.

The communiqué read in part: “The meeting expressed concern on the continued gridlock on Oshodi-Apapa Expressway and the chokehold it has exerted on the nation’s economy being the sole outlet from Apapa Wharf.

“The meeting, therefore, recommended the activation and establishment of ports in other states of the federation to create new jobs and promote socio-economic activities in the country.

“The meeting expressed concern on the economic implication of another lockdown on the country and therefore suggested greater coordination and cooperation between federal and state governments in evolving strategies for dealing with COVID-19 pandemic.

“The meeting expressed grave concern on the security challenges currently plaguing the nation and strongly urged that Mr. President should address Nigerians on the challenges of insecurity and restore the confidence of our people. 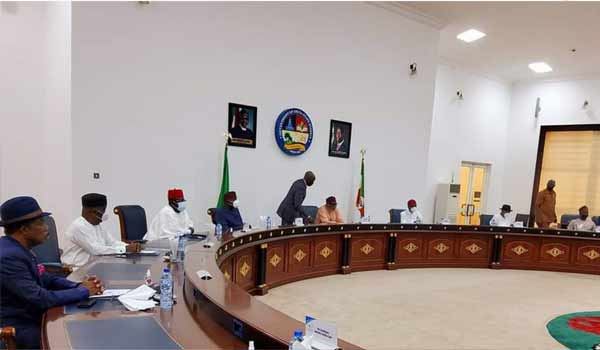 Recall that there have been persistent gridlock along Oshodi-Apapa Expressway, Mile-2, and Apapa environs occasioned by the nefarious activities of mainly containerize-laden vehicle and tanker drivers who park indiscriminately on highways, thereby blocking other road users from having access to their various destinations.

Despite several interventions which saw the creation and now-disbanded Presidential Task Team, creation of Lagos State Special Traffic Enforcement and Management Team, set up by Lagos State Governor, Babajide Sanwo-Olu as well introduction of Electronic-call up system by management of the Nigeria Ports Authority, NPA, and stakeholders’ meant to restore sanity in the axes, chaos, mayhem has continued to be the order of the day.

Touts and miscreants have hijacked traffic management at their whims and caprices, with security and traffic personnel, including policemen and Lagos Traffic Management Authority, LASTMA, Federal Road Safety Corps, FRSC, being compromised, making brisk money from the truckers to the tune of several millions extorted weekly. Traffic robbers have also cash-in on the situation to carry out their nefarious activities, attacking innocent motorists and commuters, robbing them of their money and other valuables. Sometimes, they inflict bodily injuries on their victims, while few unlucky ones have died in the process.

The commercial motorcyclists, popularly called “Okada riders” have constituted nuisance to residents, maiming and kiling passengers, and sometimes engage in robbery attacks. The situation is further compounded by the various deplorable state of roads and road rehabilitation projects ongoing in the axes, which is being handled by Messers Hitech Construction Company,. The contractor, however, had been accused of slow pace in the execution of work.