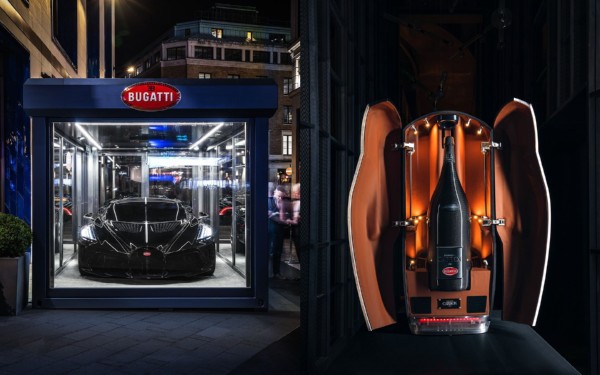 The 15-litre carbon fiber bottle, the result of 150 hours of craftsmanship, is secured within a sculptural case.

At the push of a stainless-steel button, the hand-crafted case, itself, a masterpiece, opens to reveal a sumptuous interior. 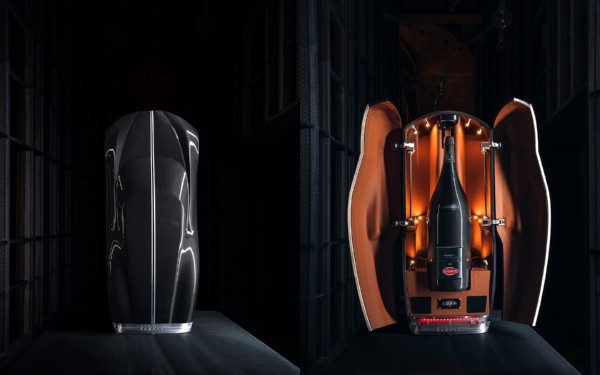 Bugatti and Champagne Carbon has reveal the most spectacular, hand-crafted champagne bottle and case in the world : the one-of-one, La Bouteille Noire.

The La Bouteille Noire was revealed at a private event this week at The Londoner, London’s newest five-star hotel and the world’s first super-boutique residence. 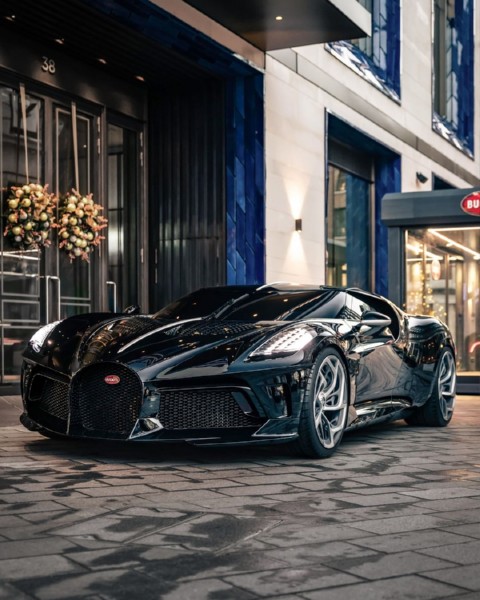 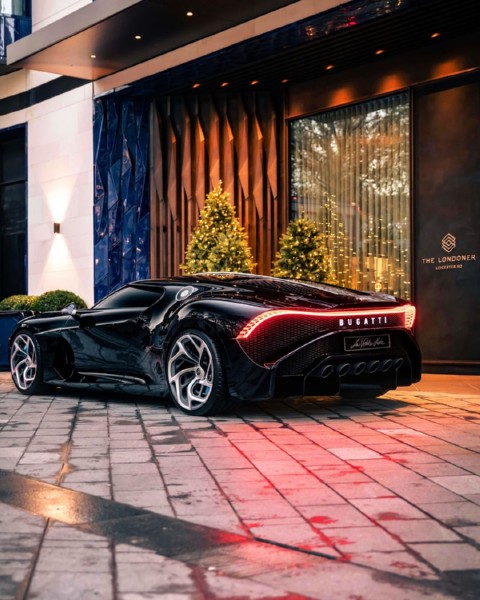 Inspired by one-off Bugatti La Voiture Noire – the ultimate incarnation of its Type 57 SC Atlantic – the 15-litre carbon fiber bottle is the result of 150 hours of craftsmanship involving 37 steps, nestles securely within a sculptural case.

The hand-crafted case itself – the work of Bugatti partner IXO – is a masterpiece. It features 314 individual sheets of prepreg carbon fiber, exactly like the materials used in Bugatti’s line-up of advanced hyper sports cars. 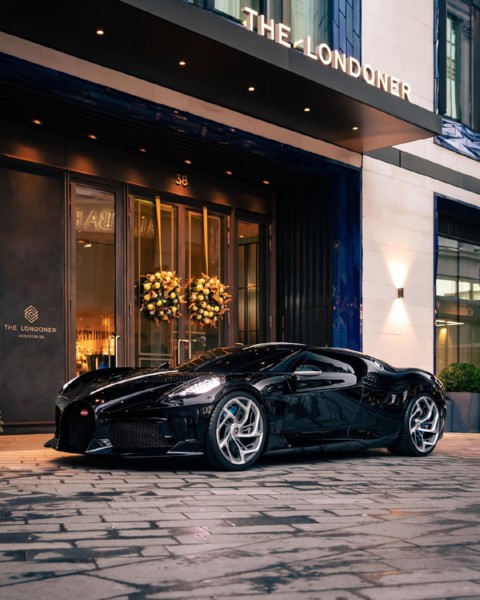 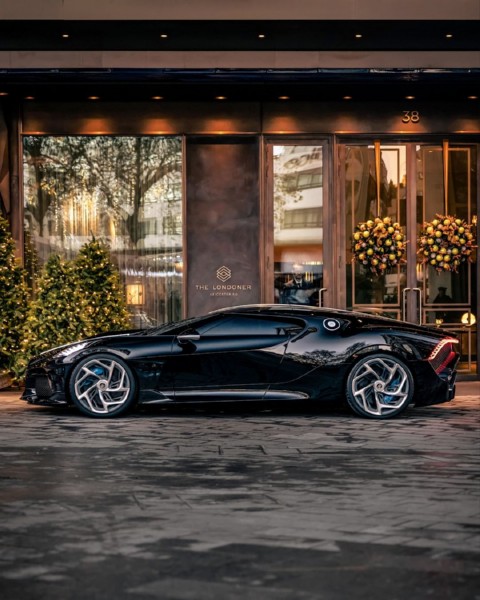 The cutting-edge technology within includes an automatic solid-state thermodynamic cooling cell – normally found in orbiting satellites – together with 14 high-end fans circulating cool air within the case. 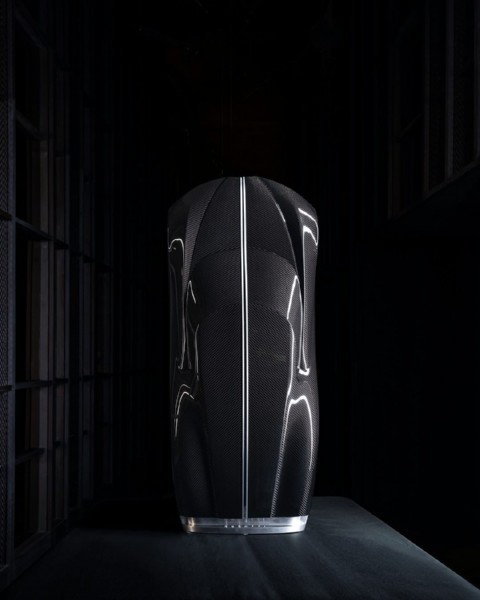 La Bouteille Noire sits upon an illuminated vivid red base, which itself is a miniature recasting of La Voiture Noire’s elegant rear light – one flowing lit panel, with no joints. It’s recreated here by a block of sanded acrylic glass, illuminated in red LEDs, incorporating the jewel-like letters of BUGATTI over a surface of brushed natural aluminum.

At the push of a stainless-steel button, the case opens to reveal a sumptuous interior. As the doors gently unfold, another automatic system releases the neck of the bottle, which is secured while closed. 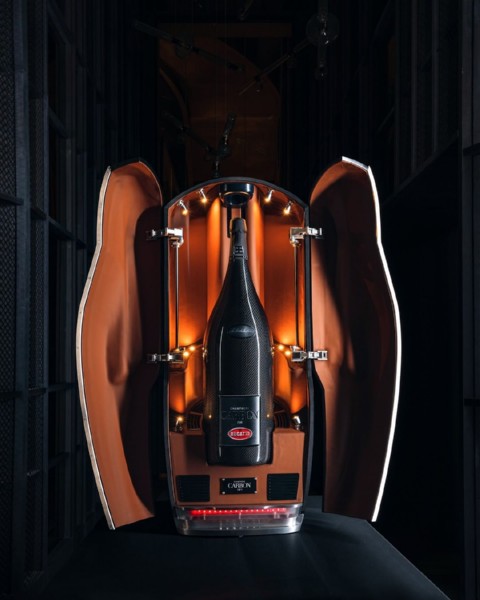 “With a creation as spectacular as ‘La Bouteille Noire’ it was only right that we pair it with one of our most spectacular vintages. On this occasion, we have chosen a 2000 Vintage blend of 60% Chardonnay and 40% Pinot Noir.”

“Celebrating the beginning of a new millennium, the year 2000 was marked by a relatively mild winter followed by a succession of summer temperatures throughout the flowering period.” 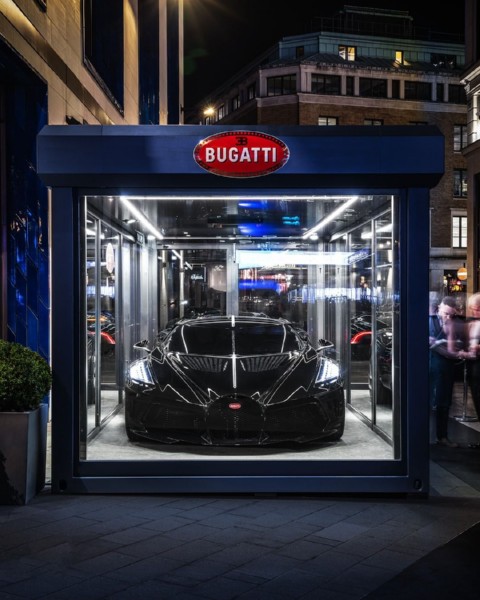 “It’s characterized by rich notes of vegetables, pepper and white fruits – the result of the finest Grands Crus that the Champagne vineyards offer us. Each one brings its own surprises to magnify this cuvee.”

Until December 1st, the Bugatti ‘La Voiture Noire’, built to celebrate the company’s 110th anniversary in 2019, will be displayed within an illuminated glass box outside The Londoner in Leicester Square.