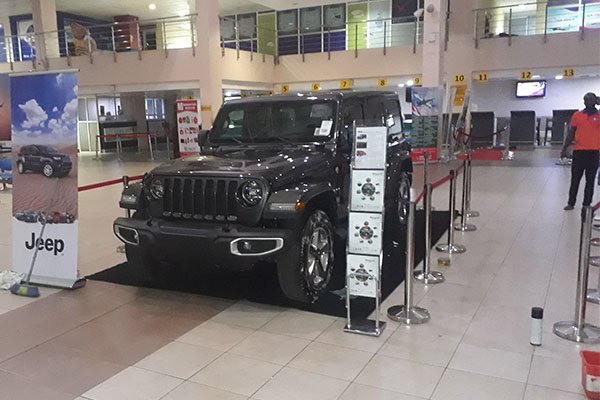 Travellers passing through the Murtala Mohammed local terminal Two in Lagos, have been appreciating the display of the Jeep displayed at the terminal by Kewalram Chanrai, sole distributor of FCA brands in Nigeria. This is part of the efforts being put in place by the company to let the discerning public know more about the attributes of the FCA brands in the country.

Hence, the FCA brands such as Jeep, Fiat, Dodge, Jeep, Dodge, Chrysler, Ram, Fiat, Alfa Romeo, Maserati, amongst others are currently enjoying better attention from customers following the takeover of the distributorship of the brands by the Kewalram Chanrai group recently. Kewalram Chanrai, is known for its solid pedigree in auto distributing and after-sales within and outside the country.

The Jeep Wrangler is a series of compact and mid-size (Wrangler Unlimited and Wrangler 2-door JL) four-wheel drive off-road SUVs (Sports Utility Vehicle), manufactured by Jeep since 1986, and currently in its fourth generation.

Known for its toughness and rigidity, the SUV, once taken as only meant for off the road terrain, has metamorphosed into an urban vehicle that can adapt to all kinds of terrain be it city or country side.

The Jeep Wrangler which can easily adapt from being a work vehicle to a leisure accompli, has won a lot of admirers over the years that it has become a household name needing little review about its offerings.

It comes with a Full Time Four Wheel Drive system, with a 7inch touch screen display that enhances its aesthetics and promotes one of its major concerns, which is-safety.

The owner of the Jeep Wrangler is also sure of enjoying the use of a park view/rear back-up camera, even as there are also air bags fitted round the award winning vehicle.

Different occupants of the vehicle do not only enjoy the powerful air conditioning system the vehicle offers, they are also entitled to automatic temperature controls.

Because of the need to ensure maximum comfort for all occupants irrespective of the terrain, the Jeep Wrangler comes with heavy duty suspension and shock absorbers.

Other specs in this vehicle are almost endless, but a few more that can be mentioned are Traction control that keeps the driver focussed and in lane, deep tint sun screen glass, premium lighting etc.

The Jeep Wrangler is not only making waves in Nigeria, as only recently, readers of one of the most famous Russian motoring magazines, Za Rulyom (Behind the Wheel), named the Jeep Wrangler as winner in the Premium Crossovers and SUV category of its Grand Prix awards, which crowned the best new cars of 2018.

According to more than 25,000 readers who took part in the voting, the best newcomer in the Premium crossovers and SUVs category was the Jeep Wrangler. The vehicle was appraised through online voting across three criteria: Equipment, Design and Practicality.

And because the Jeep has consistently been associated with laurels, Juventus the soccer team with the Jeep® brand on its jerseys has beaten its own record by winning the Italian championship for the eighth time in a row, with five days to go before the end of the Italian football season.

The Apapa-Wharf Road That Dangote Reconstructed; See What Parked Trailers Are Turning It To (PHOTOS)

FRSC Releases List Of 24, 000 Unclaimed Drivers Licenses Around The Country; Check If Your Name is There