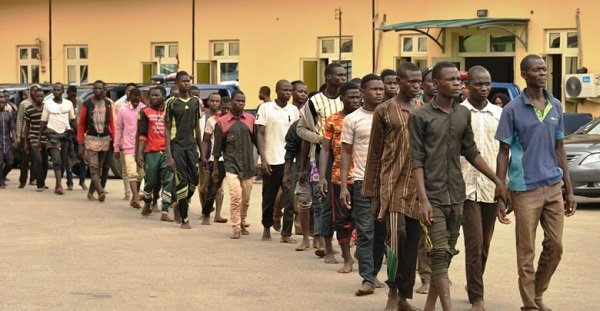 The Lagos State Government wishes to state that the arrest of 123 Suspects by the State Task Force was a routine security check.

On the directives of the State Commissioner of Police, Mr. Zubairu Muazu, the arrested suspects have been moved to the State Police Command where they are being profiled and if nothing incriminating is established against them, they will be released immediately.

In a statement today, the Commissioner for Information and Strategy, Mr. Gbenga Omotoso affirmed the State Government’s commitment to the security and well being of law abiding residents of the State, noting that the mass movement of the arrested suspects with large quantity of used motorcycles aroused the suspicion of Lagosians who duly alerted men of the State Task Force.

The Lagos State Government allayed the fears expressed, especially on the Social Media that the arrests were directed at a particular section of the country, stressing that this is the handiwork of mischief makers.

It must be emphasised that the checks and arrest made by men of the Lagos State Task Force, was a proactive step, against speculated cases of Boko haram insurgency and banditry attacks across the nation. The case on hand, is purely a security matter which the Lagos Police Command is capable of handling professionally.

The administration of Mr. Babajide Olusola Sanwo-Olu has clearly stated that Lagos is home for all, and will continue to make it, the most preffered destination in the world.

Related Topics:boko-haraminsurgencypolicesuspectsTask Force
Up Next