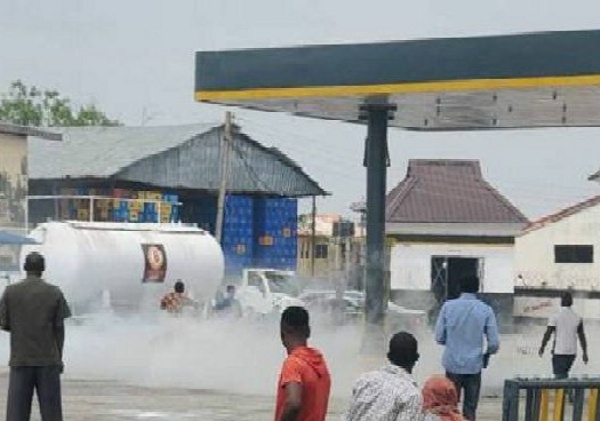 Many injured in Ilorin gas explosion after a Toyota car burst a gas pipe while exiting Bovas filling station.

The swift action of the Kwara State fire department prevented the escaped gas and the plant from an explosion.

Many people scampering for safety were injured on Wednesday after a gas explosion rocked Bovas Filling Station at the Offa garage area, Ilorin, Kwara State.

According to the Kwara state Fire Service, the incident, which occurred at the outlet of the filling station, was caused by a Toyota car that burst a pipe while on its way out of the station.

Fortunately, the swift action of the fire department prevented the escaped gas and the plant from an explosion.

Reacting to the incident, the Head of Media and Publicity of the state Fire Service, Hassan Adekunle said :

“The Brigade was summoned to the scene about 11:19hrs of today, at Bovas Filling Station at Offa Garage Roundabout in Ilorin Kwara State, through a telephone call.

“The incident was caused by a Toyota car that came to refill at the filling station. And on his way out of the station, he suddenly hit the connected fitted pipes of the gas plant and eventually led to the profuse leakage of gas.

“However, our men were able to prevent the escaped gas and the plant from an explosion by continuous cooling until the whole fittings were properly normalised.

“The Director of State Fire, Prince Falade Olumuyiwa urged the general public to be more careful, and advised the filling stations to procure all the necessary safety equipment at their various stations.”