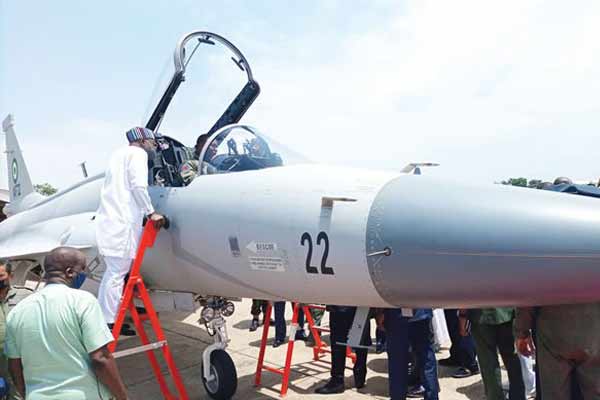 The President, Major General Muhammad Buhari (retd.), on Thursday charged Nigerians, irrespective of their ethnic, religious and political differences, to unite and work towards the growth of the country.

The President stated this in Makurdi, Benue State, during the inauguration of three JF-17 Thunder aircraft at the Nigerian Air Force base.

“I wish to use this opportunity to encourage all law-abiding citizens to continue to stand together, irrespective of ethnic, tribal, religious or political affiliations, to pursue the greater goal of a secured, united and prosperous nation for us and our generations yet unborn, as we have no other alternative but to do this,” Buhari stated.

The President, who was represented by the Minister of Defence, Maj. Gen. Bashir Magashi (retd.), said his administration would continue to work with partners and other members of the international community to tackle the challenges of terrorism.

He stated, “I believe that our nations will continue to take steps that will deepen our bilateral relations for the betterment of our peoples. This administration will continue to work with our partners and other members of the international community in order to collectively evolve solutions to the common challenges of terrorism and proliferation of small arms and light weapons, which, of course, have varying degrees of sub-regional, regional and global impacts.

“Indeed, such mutually beneficial interactions are part of our commitment to a whole-of-nation and whole-of-humanity approach to dealing with insecurity in Nigeria, West Africa and the entire African continent.”

The President commended the NAF for its critical roles in national security and peace-keeping operations on the African continent in places like The Gambia, Guinea, Mozambique and Liberia.

He also appreciated the resilience of Nigerians, whom he said had continued to resist all negative elements that seek to divide the country with their destructive rhetoric and disingenuous propaganda.

Speaking earlier, the Chief of Air Staff, Air Marshal Oladayo Amao, said with the three new aircraft, the service now had 26 aircraft in its fleet.