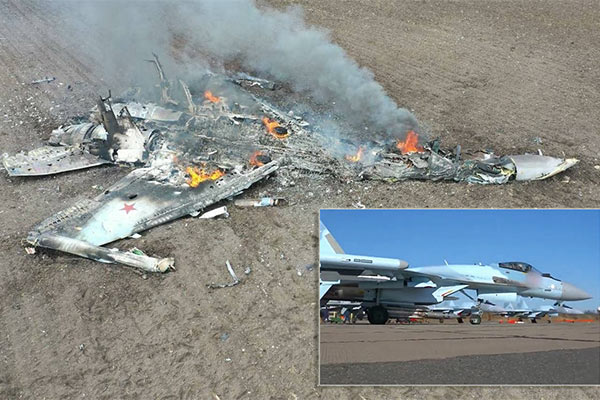 The Su-35s’pilot ejected and survived, according to officials.

Russian military had earlier in March said it has knocked out all of Ukraine’s air defense assets and airbases.

At least one Russian Su-35S Flanker-E fighter jet was shot down by Ukrainian air defenses in the country’s eastern region.

The Ukrainian military says that the aircraft came down on Sunday near the city of Izyum, some 75 miles southeast of Kharkiv.

Su-35s’pilot ejected and survived, according to officials.

As noted by the Milirarnyi, the Russian pilot’s name is Sergei Yermalov – he is a major in the Russian Air Force. Serves in the 159th Guards Fighter Aviation Regiment (based at Besovets airfield, Republic of Karelia, the regiment received the first Su-35C in 2016).

Serhiy Yermalov said that he had made 15 combat sorties into Ukraine. The pilot’s last combat mission was to search for Ukrainian air defense units. The plane he last piloted was armed with an anti-radar missile and guided bombs.

According to TASS, the Su-35S is a heavily upgraded generation 4++ supermaneuverable multipurpose fighter jet developed on the basis of fifth-generation technologies. The Su-35S is distinguished by its new avionics suite based on the information control system, the new radar, plasma ignition engines of the increased capacity and thrust vectoring.

The Su-35S has been in service with the Russian Army since 2015.

Meanwhile, the Russian military said earlier in March that it has knocked out all of Ukraine’s air defense assets and airbases.

The Russian Defense Ministry claimed the Russian strikes have “suppressed air defense means of the Ukrainian military,” adding that the “infrastructure of Ukraine’s military bases has been incapacitated.”