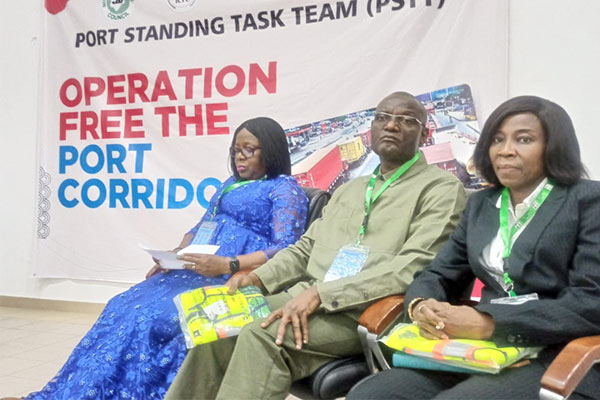 The operation, dubbed “Operation free the port corridor”, is an initiative of the Port Standing Task Team (PSTT).

PSTT was established to entrench accountability and transparency and boost enforcement activities.

The Federal Government has flagged off a special operation to remove illegal checkpoints and clampdown on corruption on access roads around the Apapa and Tin Can Island Ports in Lagos.

“Operation free the port corridor”, an initiative of the Port Standing Task Team (PSTT), was flagged off at the premises of the Nigerian Shippers’ Council (NSC) in Apapa by the Permanent Secretary, Federal Ministry of Transportation (FMOT), Dr. Magdalene Ajani.

PSTT was established by the Independent Corrupt Practices and Other Related Offences Commission (ICPC), in conjunction with the Directorate of State Services (DSS), Nigerian Shippers’ Council (NSC), and Nigerian Ports Authority (NPA) to entrench accountability and transparency, boost enforcement activities, as well as promote integrity in Nigeria’s maritime sector.

“While coming here this morning, from airport to Apapa port, took me just 40 minutes. This is evidence of what the Port Standing Task Team is doing. The key thing is that we need to treat this challenge holistically. And that holistic treatment is what we are trying to achieve,” Ajani said.

The FMOT Permanent Secretary said that the Federal Government aims to achieve the ease of doing business in Nigerian ports and on the ports corridor.

“We get the containers out, then to drive from terminals to Liverpool takes another six hours; not that the six hours is stress-free. This is happening just because we have 26 checkpoints. This next stage we are going is to reduce or completely eliminate illegalities at this point.

“I was at a meeting in Abuja. The only charge I gave in that meeting is to let us try and work based on our Standard Operating Procedure and then also agree on the checkpoints that must be on the corridor so when we agree on the security agencies that are supposed to be there, we know that yes, these are our official security operatives in our checkpoints. Then we all agree to remove all the illegal checkpoints. After this, sustainability will have its way. To be able to achieve this, if we all agree to achieve this, we will,” she said.

The Executive Secretary of Nigerian Shippers’ Council (NSC), Emmanuel Jime said “Operation free the port corridor” is the third in the series of activities the Port Standing Task Team since its inception in March 2021.

“The team began its monitoring and enforcement mandate at the joint boarding of vessel operations where they ensured adherence to the provisions of the Nigerian Port Process Manual (NPPM).

“Following the success of the first phase, the team moved to the terminals in its second phase of activities to ensure a new culture of joint cargo examination in compliance with the NPPM to foster global best practices.

“Today marks the implementation of the third phase as we embark on sanitizing the port corridors,” Jime said.

“The roads are bad. Between here and Orile, the whole road has almost collapsed. The miscreants are not afraid of bullet or machetes, they are there for anybody. However, my concern is who are these thugs standing for? This is my question. ECOMOG, Kenbe; whatever name you are calling them – they are standing for the security agencies they have mentioned earlier and nobody is exempted and I’m not going to exempt anybody. These boys are not on their own.

“The are enjoying backups. We need to investigate who are these backups and if we don’t dig deep to know them, they will keep giving deliverables to those who are sending them and all of us will just be shouting for nothing.

Speaking earlier, the National Coordinator of PSTT, Moses Fadipe, said the team has succeeded in speeding up clearing of cargoes at the port despite the mounting of at least 26 illegal checkpoints by security operatives on the port access roads.

“Previously, when a vessel arrives, it takes five hours to berth but now with the activity of the task team, it is taking 90 minutes. It used to take seven to ten days to resolve complaint, now we are resolving complaint in less than four hours.

“However, despite all these proactive moves to clear the containers, but these cargoes, when they move out of the port, what becomes of them? From our surveillance, We have observed that from the Apapa port to Sifax Ijora, less than two kilometers, we have 26 checkpoints. We have it on record. And that was why we say we can’t continue like this and we have to introduce operation engaging all the officers of the government to do their statutory function and all of us unanimously agreed that we will clean the port corridor.”