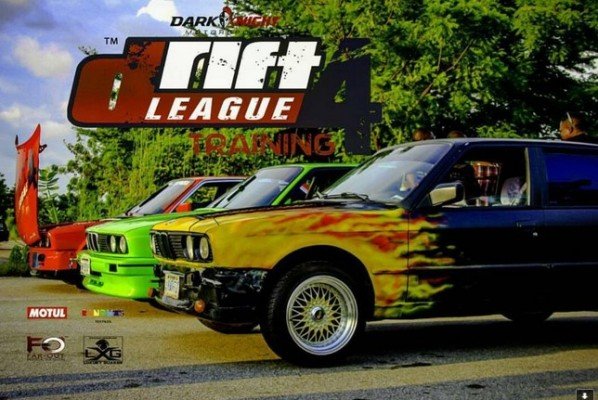 Thanks to the petrol heads and organizations  that are working day and night to see that the flag of the automobile sector is flying high.
2017 was a new dawn in Nigeria, it was a beautiful year for motorsport in Nigeria.

This 2018, we would love to carry a lot of people along; so we bring forth to you the upcoming motorsport events for the year 2018. 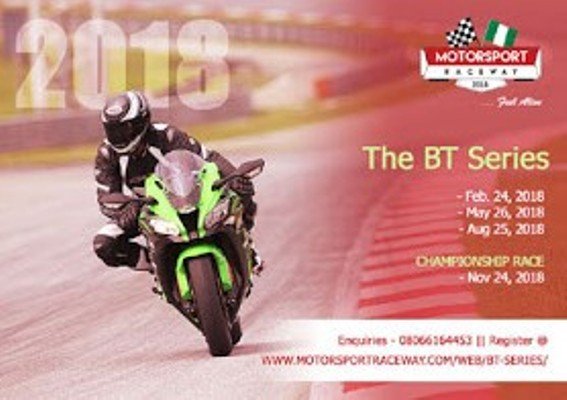 On the 25th of November 2017, the 5th edition of The BT 2017 took place. This was a huge success and was the launch of Nigeria’s first racetrack.
Now in its 6th year, the annual flagship & premier motorsport event in West Africa return for 2018 with the introduction of The BT Qualifying Series. Scheduled to hold in the last weekends of the Months of February, May & August, The BT Series is the process through which racers in the 600cc & 1000cc Categories of the Superbike Race Championship that will hold, as traditional, on the last Saturday of November which is the 24th of November 2018. The Organizers of The BT have tagged the 2018 edition “The Mother of All BT”. Don’t miss out.

2. THE ROADX RACE SERIES:
The RoadX Race Series is a team based BMW E30/Mercedes Benz 190 car racing series and is scheduled to begin in February 2018. Eight (8) races are planned for the 2018 Season that sees its Championship also decided at The BT in November. Already 12 teams are registered to take part in the Series. Highlights of the race series are expected to form regular TV content for Motorsport fans in West Africa. To keep up to date with the race series, follow @RoadXRaceSeries on Instagram.

4. ONDO AUTO RALLY:
Organized by Work and play events. They came into the scene in 2017 with Sagamu Auto Rally in May andOndo Auto Rally in November. The Ondo Auto Rally was a fun event which included road and off-road races with prize monies for the winners. The organizers have decided to concentrate all resources towards having only one race (Ondo Auto Rally) for the 2018 motorsport year.  We have confirmation from Work and Play that Ondo Auto Rally will take place in November 2018.

5. THE ROADX UNVEIL:
The RoadX Unveil event aims to showcase new teams, new drivers, new colours and new team sponsors in the RoadX Race Series for the next racing season. The 2017 event was a hit and we expect an even better showcase of The RoadX Teams at The Unveil in October 2018.

6. ELEKO MOTOR RACE:
Eleko Motor Race didn’t hold in 2017 but the organizers have confirmed a 2018 edition for the racing event. We have missed off-roading along the Lagos coastal line of Lagos and we can’t wait to do it again.

Drift League 4 was organized by Darkknight Motorsports in Abuja on 1st December 2017 after months of driver training and it was another successful event. The 2017 edition witnessed attendance of quite a number of Lagos drift lovers which signals a good sign of cooperation within the motorsport community. We expect the 2018 edition to also take place in December.

8. THE RACETRACK CHALLENGE:
The racetrack challenge is planned as a Reality TV themed car racing competition. The idea is to also take motorsports to the grassroots by identifying hidden talents and giving them the opportunity to enjoy their passion. Auto garages looking to key into the motorsport value chain are also expected to take part in the project. Track used BMW E30 cars will be given to garages to prepare and make race ready with a budget cap. Selected drivers from the audition to be held in Lagos, Abuja & Benin City in February 2018 will then be sequentially eliminated to get the Final Five Contestants to race against each other to win The Race Track Challenge. Expect scenes from the RaceTrack Challenge on your screens in the 2nd Quarter of 2018. The Race Track Challenge is expected to run as a TV Series & we hope for a successful 1st Edition. To register in the race track Challenge Season 1, go to https://motorsportraceway.com/racetrackchallenge 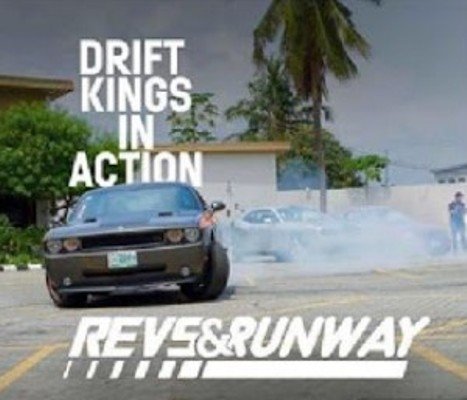 Lagos drift kings Mach Motorsports didn’t fail to disappoint in 2017 after coming into the scene in 2016. They basically upped the game from a smaller location into Tafawa Balewa Square which has a much wider space for drifting, they also did a good job infusing a runway show into the event. Revs and Runway also witnessed the presence of Abuja Drift drivers including. It’ll be awesome to have a collaboration between Mach Motorsports and Darkknight Motorsports in 2018.

10. BMW DRAGFEST 2018:
Just after we had settled down to take a look back at 2017, BMW Club Nigeria surprised us with the Xmas Autofest. The show was action packed with drag races from beginning to the end involving cars and bikes, a perfect way to end the year if you ask me. Before the end of the event, they announced that there will be 4 drag races to be held in the city of Lagos in 2018. We surely are anxious. BMW Club is yet to reply our mail of inquiry into the event dates.

Don’t miss out in these great events. Let’s come out and have some fun. See you there when the time for the events come.

What The Car You Drive Says About You