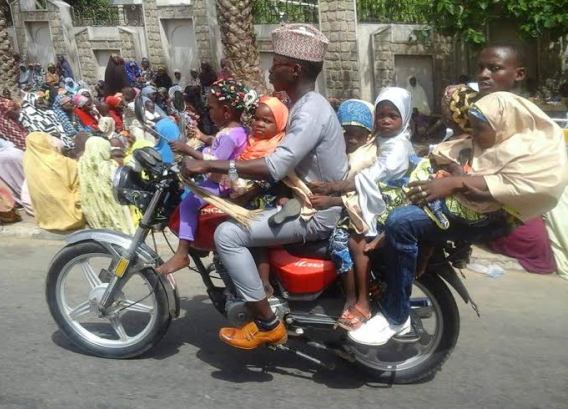 I personally avoid “Okada”(motorcycle or motorbike) as much as I can .But some situations come up where you just can not do without these guys .

For some people its an everyday affair and very few people take their safety into consideration.

Today I would be giving you some tips on how to ensure your safety when boarding an Okada.

1.Make Sure He Is Not Drunk

This is more than important ,it should be your first check.Observe closely , at the first sign of alcohol back off !!,even if he looks completely sober.

This is debatable,but its safe to say that real men and not boys are more responsible .Usually between the age bracket of 30 and 45,they are always cautious of their speed and most times obey traffic laws compared to the younger ones.After all, they have kids at home and they don’t want to die

3.Be The Only Passenger If You Can

Its safer to be the only passenger.And I know  many of the Okada men would not agree,but its safer.

4.Learn To Caution The Rider

If he is over-speeding and taking dangerous maneuvers and overtaking both big and small, with reckless abandon ,speak up !.

I know some people would protest at this.But its safer to avoid okada at night .A tricycle would suffice.

Cars move faster on such roads ,and bikes are more prone to accidents in such scenarios.

7.Pregnant And Nursing Mothers Should Stay Away !!

Yeah I said it ,its just too dangerous .In the event of even a slight fall ,the aftermath could be fatal.Don’t also back your babies on an Okada .

8.Be Careful With Dangling Clothes And Accessories

Trust me it could be fatal.

I am sure you have a good imagination ,play the scenario slowly in your head

9.Never Leave Kids Alone At The Back Without An Adult

Except the kid is holding the riders waist firmly .But I see a lot Nigerian parents sending Okada men to pick their children from school(sometimes up to 4 of them on one bike ??? !!!).Its very risky.

10.I Think Helmets Should Come Back

This is really not a tip,more of a suggestion, because the use of helmets in Nigeria has proven almost impossible .Due to hygiene concerns and other reasons it has continually failed .But note that it is still safe to have an helmet on when you are on a bike .

What do you think ?,have something to add ?.

Disagree with a point ?