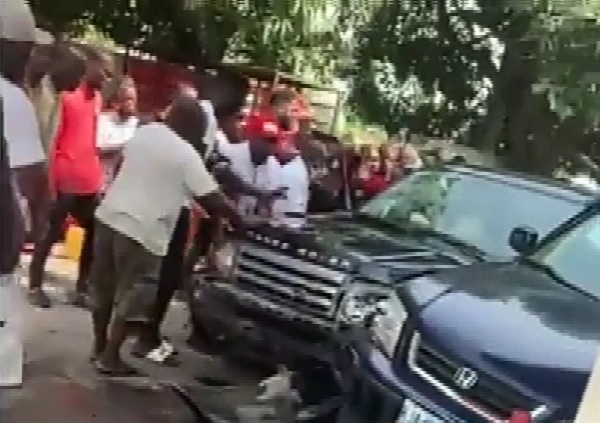 2 injured after a driver crashed his Range Rover into car, people buying fuel at a filling station in Lagos.

A user, who claimed to be at the scene, said the driver mistaken accelerated instead of pressing the brake.

The driver of the Range Rover SUV reportedly payed for the medical bills of the injured.

Two (2) people reportely injured with broken legs after a driver suspected to be drunk crashed his Range Rover SUV into cars and people at a petrol station in Lagos.

Its currently unknown what really led to the crash, but a user, who claimed to be at the scene, said the driver mistaken accelerated instead of pressing the brake.

The user also claimed that driver of the Range Rover payed for the medical bills of the injured, who were taken to nearby hospitals after breaking their legs in the crash.

Footage taken at the crash scene shows a Range Rover SUV that is wedged to the side of a Honda CRV SUV.

Gathering crowd of people were also seen around the damaged vehicles, as some contemplates damaging the driver’s Range Rover SUV.

Watch : Incredible Rims Makes This Mercedes G-Wagon Looks As If It Is Floating On The Road

Isreal DMW Crashes His Toyota Venza In Edo, 2-weeks After Receiving The Gift From Davido