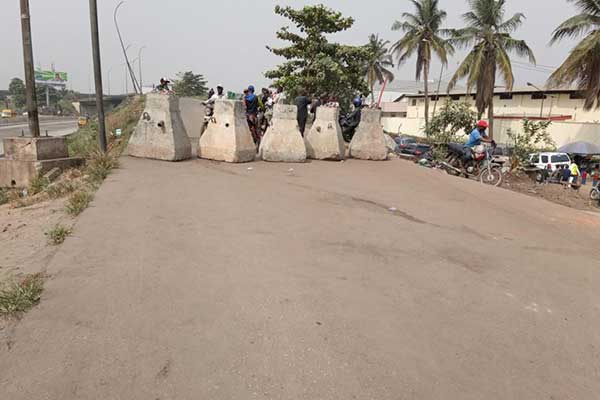 The continuous closure of the link bridge connecting Apapa-Oshodi Expressway with Murtala Muhammed International Airport (MMIA), Lagos to vehicular traffic is causing disorder on the busy route, as motorists flagrantly violate traffic rules to get to their destinations amid lamentation and groaning.

Surprisingly, both the Federal and Lagos State Governments have either remained silent or taciturn regarding when the bridge would be fixed.

The Lagos State Government had on Sunday, January 10, announced the indefinite closure of the bridge from the Toyota Bus Stop end.This is following the severe damage to one of the supporting pillars by fire from a diesel-laden tanker accident that occurred on Thursday, January 7.

Since the closure of the bridge to vehicular traffic four months ago, motorists and commuters have had more stress added to their normal routine, as they grapple with the challenge of commuting along the alternative routes.

It was earlier reported that motorists have consistently defied government’s directive on alternative routes. This is pending the outcome of integrity tests carried out on the bridge, due to deplorable state of the roads. On the premise of this, even some motorists who insist on plying one-way have had brushes with law enforcement agencies.

With the tests already done, government has remained silent on when repairs would commence, even as motorists and commuters continue to lose man-hours, driving through the alternative routes, which had become daily torture due to traffic snarl, potholes and poor traffic management.

As a result of the absence of commercial buses that hitherto load at the foot of the bridge at Toyota bus stop, commercial motorcyclists, popularly known as Okada, are having field day, as most airport, Mafoluku, Oshodi and Ajao Estate bound commuters patronise them to get to their destinations faster on the dualised airport road.

Also, some street urchins, under the cover of National Union of Road Transport Workers (NURTW), have opened an office on the bridge, collecting daily ticket money from Okada riders. Prior to the explosion, these urchins only swooped on commercial buses at the foot of the bridge.

To connect airport road, some motorists from Mile 2 sometimes go through Iyana-Isolo via the popular Daleko rice market, make a U-turn at Oye roundabout to join the Isolo-Mushin link bridge and drive onward to Aye bus stop to connect Osolo Way and 7/8 bus stop, where they connect the Apakun flyover toward MMIA.

According to some motorists, driving through these routes is alright on a good day, but the traffic jam associated with Isolo-Mushin road due to a mixture of many factors, including potholes/craters, container laden trucks going into Isolo industrial avenue and trailers loading rice and other edibles from Daleko rice market, slow down vehicular movement.

They further lamented that linking airport road through Aswani Market is another good option, but for the regular traffic snarl on Osolo Way, which sometimes starts from 7/8 junction up to Asa Afariogun junction down to Aswani market makes matter worse.

Meanwhile, container-laden trucks, from time to time, take over most of the service lane on Oshodi-Apapa Expressway opposite The Guardian, thereby compounding the situation.

The second alternative route, driving to Oshodi through the service lane by NAFDAC Lagos office, is not better, as commercial bus drivers, who pick up passengers indiscriminately, have converted part of the road to garage.

The Guardian’s visit to Oshodi revealed that a stretch of up to 300 metres of the service lane from NAFDAC Laboratory to the Terminal 1 has been turned into garage by intra and inter-state commercial buses plying Ibadan, Akure, Ondo, Ijebu-Ode, Abeokuta, Osogbo, Ilesha, Victoria Island, Lekki and Ajah routes.

To connect airport road through Bolade bus stop via Church Street through Owoseni bus stop onward to Boladale Street or Sehinde Callisto to Charity Bus Stop on Oshodi-Apapa Expressway is not an easy task for motorists due to heavy traffic on the route due, as commercial buses park indiscriminately to pick passengers at Owoseni junction along Oshodi road.

According most motorists who spoke to The Guardian, a trip that should ordinarily not take more than 10 minutes from Toyota bus stop to the airport now takes at least an hour off peak period and almost three hours at peak periods.

They lamented that the only option left to them to connect the airport road is to ply one-way by making a U-turn just before the Armed Forces Resettlement Centre (NAFRC) at Charity bus stop, daring the danger of head-on-collision with coming vehicles that actually have the right of way.

These buses, The Guardian observed, usually go in convoy, not minding the presence of LASTMA officials and operatives of the Lagos State Environmental and Special Offences Enforcement Unit, popularly called taskforce, who often times wait in ambush and make a kill of private vehicles that dared join the convoy.

Most private motorists bemoaned how these law enforcers most times lay wait in commercial buses, luring unsuspecting car owners to ply the one-way and half way up the bridge, disembark to arrest them. And the rest is better imagined.

A motorist, Livingstone Obasi, told The Guardian how he had to pay extra charge for missing his flight to Port Harcourt. “I was billed for a 4p.m flight, but due to the closure of the bridge and the merry-go-round, couple with the bad road network and traffic, I missed my flight and had to pay extra charge. Nigeria today is a failed state,” he recalled.

Obasi pleaded with government to urgently fix the bridge to spare road users the stress they presently go through, adding: “We are not asking for much from them (government); all we ask is good roads with linkable networks.”

For Obed Ejiofor, a spare parts dealer at Ladipo Auto Spare Parts Market: “The effect of the closure of the bridge is two-way. For some people who before now have always trekked home, it is not a big deal, while for some others, it has been harrowing pains.

“Since the closure, I have learnt to close my store early to avoid being caught up in the rush hour.”

A commercial bus driver, Charles Obijuru, told The Guardian that going through the alternative routes take heavy toll on his daily target, as it takes longer time to get to the park at Hajji Camp along airport road.

He said: “This means more fuel is consumed, but without increase in fare. This notwithstanding, the owner of the bus still expects me to make the same daily delivery, despite the extra time and fuel incurred in this extended trip.

“Government should help us, some are dying slowly due to the stress we undergo daily navigating these alternative routes.”Tina Ogbechie, a staff of a hair processing company located at Five Star bus stop, said going home after close of work has become a challenging since the bridge was closed, adding that she now pays more to get to her destination in Mafoluku, having to board Oshodi bound buses, instead of airport road.