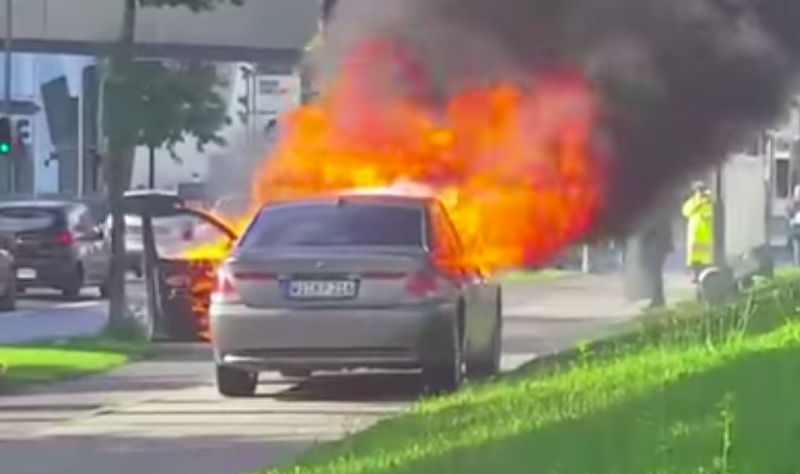 An Iranian-born businessman named Hadi Pourmohseni showed his displeasure with the automaker by setting his BMW 7 Series on fire outside of BMW’s headquarters near Olympiapark in Munich,and stood with a sign that says “BMW Kundenbetrug Kundenerpressung Prozessbetrug Schaemt Euch!” which translates to “BMW customer deceit customer blackmail process fraud.”

He’s doing this because the car he leased in Italy nine years ago,a 2008 BMW M6 allegedly had significant rattles and transmission shifting issues, and BMW’s dealers supposedly dismissed his concerns.

He was so disappointed with the quality of his leased 2008 BMW M6 and with the dealer’s service that he decided to ruin the BMW M6 with a sledgehammer and axe outside the Frankfurt Motor Show in 2013.

But don’t think Hadi has only destroyed BMWs on those two occasions.
BMW agreed to look at the problem as long as the 2008 BMW M6 was returned to original condition.

Pourmohseni complied and restored the $160,000 luxury sports sedan he had sledgehammered/axed the year prior to its original condition,only so he could smash it with a sledgehammer again outside of the Geneva Motor Show in 2014.
Then in 2015,he set a BMW Z3 on fire.

Now he’s supposed to give the car back to the manufacturer, and he’s not happy about it, telling“A joke! Even if I don’t drive it anymore, don’t take my evidence away!”

So,to once again show his displeasure with the Bavarian automaker,he set a BMW 7 Series ablaze outside of BMW’s headquarters.

The fire department had to show up to quench the blaze,and police ended up tossing Pourmohseni to the ground and handcuffing him.The police said that they can’t charge Pourmohseni for setting fire to his own car,but are looking into charging the man with violating environmental regulations.

But that’s apparently not going to stop Pourmohseni’s antics in the future, as he said “I will continue.”

Fortunately,Pourmohseni has stopped driving BMWs and is now piloting a Mercedes Benz S350.

Can you show your displeasure with a car manufacturer by beating your car with a sledgehammer/axe or setting it ablaze,just to prove a point?

Have you ever had a car that drove you so crazy that you dreamed about destroying it?