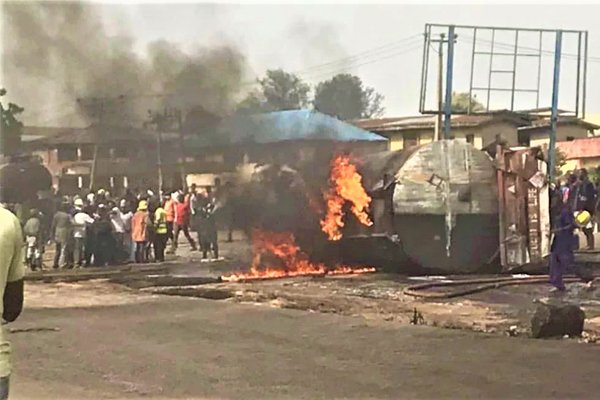 A petrol tanker has been gutted by fire along Iwo Road, the axis of Old Ife way, Sawmill along Lagos-Ibadan expressway at around 2:00 pm today.

The tanker was reported to be carrying a full load of petrol. Many are feared dead following a severe fire explosion which occurred soon after it fell.

According to reports, the incident happened when the tanker suffered brake failure which caused some damages on properties within the vicinity.

The tanker explosion occurred after some individuals attempted to scoop petrol from the tanker.

Several properties which include cars, houses within the neighbourhood were gutted by the fire.

The accident also left a trail of charred dead bodies.

As at the time of filing in this report, the fire service, as well as other authorities, were yet to be present at the scene of the event.

Just In: Many burnt to death as petrol tanker falls in #Ibadan, Oyo State. [GRAPHIC]

Bugatti Takes ₦2.1b Divo Hypercar To The Desert For A Hot Weather Testing