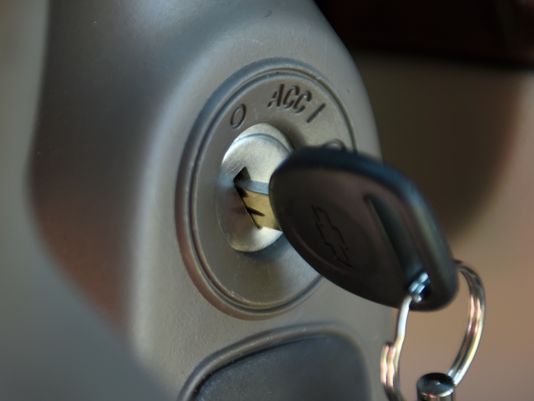 Ideally,a car’s engine should stop running as soon as the driver switches off the ignition switch.There should be no more raw fuel entering the chambers and the spark plugs should no longer ignite it.

Whenever a car’s engine continues to run after the ignition has been shut off,mechanics refer to it as dieseling.

Dieseling is so named because it is similar in effect to how diesel engines operate:by firing without a spark.The ignition source of a diesel engine is the heat generated by the compression of the air in the cylinder,rather than a spark as in gasoline engines.
The dieseling phenomenon occurs not just because the compression ratio is sufficient to cause auto-ignition of the fuel,but also because a  spot inside the cylinder(spark plug electrode,combustion-chamber/valve edge or even excess carbon) starts combustion.

An automobile engine that is dieseling will run for few seconds or few minutes after been shutdown(depending on the amount of fuel remaining in the combustion chamber and how long it takes for the ignition source to cool down),sputter,then gradually stop.This is normally seen in carbureted engines with many miles on them.If a petrol-powered engine begins dieseling,there is usually something wrong somewhere.

Dieseling can occur for several reasons:

1)Built-up carbon in the ignition chamber can glow red after the engine is off, providing a mechanism for igniting unburnt fuel.Such a thing can happen when the engine runs very rich, depositing unspent fuel and particles on the pistons and valves.Similarly,rough metal regions within the piston chamber can cause this same problem,since they can glow red.

2)It has also been suggested that an improperly rated spark plug can retain heat and cause the same problem.

3)A carburetor that does not completely close can contribute to running once the engine is off, since the extra fuel and oxygen mixture can combust easily in the warm piston chamber.Similarly,hot vaporized oil gases from the engine crankcase can provide ample fuel for dieseling.

5)An engine that runs too hot or too lean may produce an environment conducive to allowing unspent fuel to burn.

6)An idle speed that is too fast can leave the engine with too much angular momentum upon shutdown,raising the chances that the engine can turn over and burn more fuel and lock itself into a cycle of continuous running.

7)Another potential “run on” problem after an ignition has been turned off can be attributed to an inlet valve(s)that are not sealing fully allowing the piston motion to pull a fuel mixture in when technically the valve is shut.

One of the best ways to reduce the chances of dieseling is to keep your car properly supplied with oil and engine coolant. When car engines overheat,hot spots can develop and cause dieseling.

Some experts suggest that dieseling could be triggered by inferior or improper spark plugs,so you may also ask a mechanic to make sure you have the proper size spark plugs for your car’s engine.

Many dieseling problems can be addressed during a regular engine tune-up,so tell your mechanic about any irregularities you may have noticed after shutting off the ignition.

Helpful Tips On How To Identify Automotive Fluid Leaks