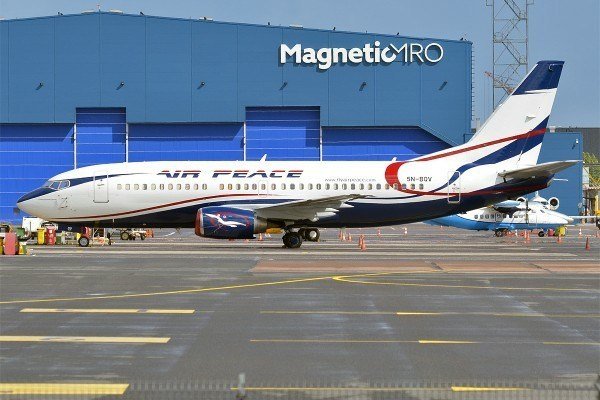 On resumption of flight operations, Air Peace airline said it will reduce operations by 60 per cent, in addition to scrapping of meals.

Ahead of resumption of flights, Nigeria’s largest airline Air Peace said it will reduce its operations by 60 per cent and in-flight meals scrapped as part of measures to cope with the crisis.

The airline also revealed that some staff may be asked to proceed on leave until flight services increased.

The new development was disclosed by the Chairman of the airline, Barrister Allen Onyema, while speaking during a webinar organized by Aelex partners with the theme:

According to Onyema, these decisions is part of measures to cut cost due to the impact of the COVID-19 on the Aviation Industry.

Onyema added that few of its aircraft would be deployed at resumption due to the reduction in the number of flights.

“From 100 flights per day, Airpeace is going down to 42 flights, so going to Abuja will no longer be every hour.”

“We are going to do about 40% of our operations and even in that 40%; We are not going to carry 40% of the passengers we use to carry before.”

With the reduction in the number of flights, he said some staff will proceed on leave until flight services increased.

He however emphasized that Airpeace was not sacking any of its staff, adding that when flight resumes fully, more staff would be brought in.

“Even we at Airpeace, we are going to down size; I expect every airline to down size because the passengers are not going to be there in the beginning; it will take time; so if you push out all your planes, you have yourself to blame.”

On scrapping of food on flights, Onyema said the era of serving food are over, adding that no airline is serving food except water.

“Now we are doing short flights in Nigeria, flight of 40 minutes or 30 minutes at most one and a half hours.”

You don’t need any NCAA or the regulator to tell you what to do, cut out feeding, time has come for Nigerian airlines to stand up and stand firm”.