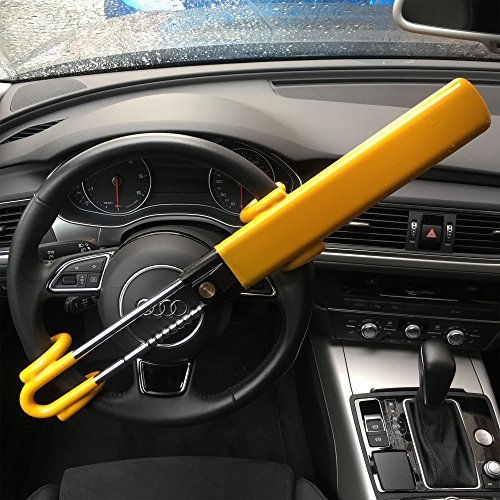 Above Pics-CCTV footage of a real car theft scene

Sales of the old security devices have increased lately as motorists are being forced to rely on the low-tech devices to stop crime gangs who have learnt how to override modern security systems.

The mechanical steering lock was thought to have gone after dominating sales in the 1990s, as keyless technology and engine immobilisers were deployed across the car industry, driving car thefts to record lows.

Now,thieves are making off with cars by using new devices called locking jammers, which work by blocking the signal sent to a car by its key when an owner is trying to lock it.

Another gadget used by criminals is a relay box, which searches for a signal from the key inside a driver’s house and transmits it to the second box next to the car.The car’s locking system is tricked into thinking the car key is unlocking it, allowing access to the vehicle.

Gangs use relay car unlocking systems,which are available on sites such as eBay for around £100,to steal targeted brands like BMW,ford, audi, Land Rover, hyundai, volkswagen and Mercedes.

Drivers around the world are advised to take precautions, including storing keys in a safe because metal can repel relay signals, and also to use steering wheel locks.

So,are you staying with your car’s inbult/self installed locking system which can now be easily tricked by the technologically advanced car thieves,or going the old-fashioned way with the steering wheel lock ?