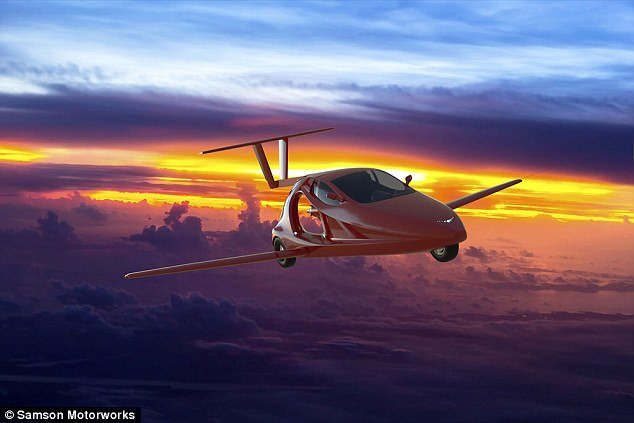 Samson Motors has joined the race to have the first flying cars in the skies, with the world’s first 200mph (320km/h) flying sports car,dubbed the Switchblade.

The Switchblade is a 5.1 metres long three-wheel car with two seats, designed by the Oregon-based Samson Motors.It has an extendable wings and a retractable tail that fold out, taking the car’s length to 6.2 metres, meaning it can be used both on the road and in the sky.

Unlike vertical take-off and landing (VTOL) vehicles, the Switchblade can’t take off from the road, and will need to be flown from regular airports.The Switchblade can cruise at an altitude of 13,000 feet and at a top speed of 200mph.It is also fitted with a safety parachute.

In terms of engine, the Switchblade has a 5-speed transmission for driving,powered by a 190bhp liquid-cooled 1.6-litre V4 engine, which gives the car a range of around 450 miles from the 113-litre(30 gallons) fuel tank.

Three versions of the car exist which includes the Snowbird for colder climates, the Trek, designed for heavy-duty landing, and the Aurora, which combines the Snowbird and Trek.

Prices will start at around £90,000($120,000), but once you’ve bought the car you can’t just jet off.A private pilot’s licence is required to fly it, and on the roads a full driving licence is needed.

Samson faces stiff competition from several other firms like Airbus, Urban Aeronautics , Lilium Aviation, AeroMobil, EHang 184, S2, Terrafugia TF-X and Volocopter,who are racing to be the first to have a flying car in the skies.