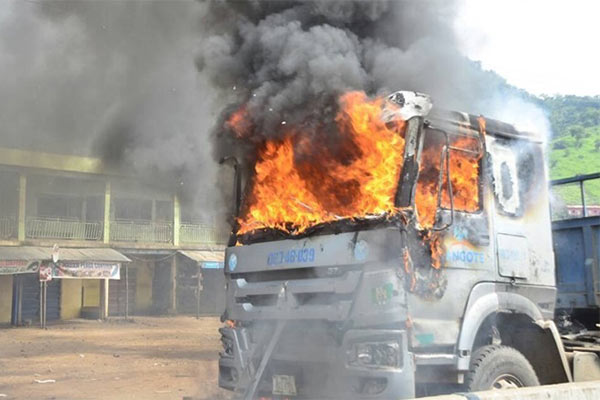 The truck was intercepted while carrying bags of cement from Okpella in Edo to Asaba.

The driver was shot dead for allegedly violating the IPOB sit-at-home-order.

The Commissioner of Police in Delta State, Ari Ali has confirmed the killing of a Dangote truck driver in Asaba, Delta State, by suspected members of the proscribed Indigenous People of Biafra (IPOB) on Wednesday.

Mr. Ari disclosed this while briefing reporters on Wednesday in Asaba.

He said the truck, which was carrying bags of cement from Okpella in Edo to Asaba, was intercepted on the road and the driver was shot dead for violating the IPOB sit-at-home-order.

“Only the driver was killed, the others ran into the bush and found their way to the police station at Ugbolu,” Mr. Ari said.

The gunmen set ablaze two vehicles and a tricycle, he said.

Recall that IPOB had issued a sit-at-home-order to all the Southeast states and Delta.

The police commissioner, Mr. Ali, said Delta State is not part of the Southeast region, and that the “evil directive” of the sit-at-home order could not be enforced in the state.

“We are not going to allow any hoodlum under the guise of IPOB or ESN to come to Delta,” the police commissioner said.

The commissioner said police operatives have been out in the street on a show of force.

“On Monday and Tuesday, we were all out. Today (Wednesday) at about 6:00 a.m., I got information that somewhere on the outskirts of Asaba on the way to the Ugbolu community IPOB blocked the road.

“Before my men arrived there, they had deserted the place. My men went round the Ugbolu community in search of the hoodlums.”

Mr. Ari said he would leave no stone unturned in ensuring that peace and security were guaranteed in the state.

He said residents in Delta were going about their businesses, in defiance of the IPOB directive.