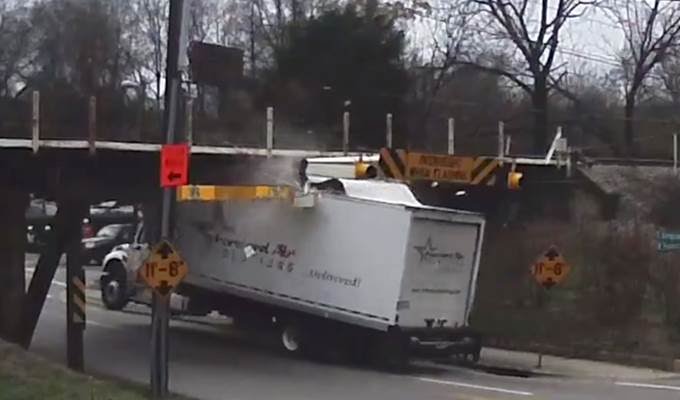 The US government recommends that bridges on public roads must have a clearance of at least 14 feet. This ensures trucks shorter than the 13 feet, 6 inches in most states pass underneath them safely.

But a railroad bridge in Durham , North Carolina, provides a clearance of just 11 feet, 8 inches, that’s more than 2 feet shorter than the recommended. At the time the over 100 years old bridge was built, there were no standards for minimum clearance . As a result, trucks regularly hit the bridge, producing some dramatic and non-fatal crashes.

Jürgen Henn has worked across the street from the bridge for years, and in 2008 he set up cameras to capture these crashes on video, posting them on YouTube and his website 11foot8.com. He recently earned a write-up from the Wall Street Journal after capturing his 100th crash.

Local officials have tried a variety of things to alert truck drivers to the danger. There are warning signs as well as a height sensor that detects too-tall trucks and triggers flashing lights. But these measures obviously haven’t been enough to get all drivers’ attention. Atleast about one truck hit this bridge in a month.

Durham officials now has a system hooking the height sensor to a traffic light before the bridge that will turn red when it picks up a too-high truck. The light will turn green eventually, but they hope it is red for long enough that drivers realize they should turn.

Have you seen a truck ram into a low bridge or barrier despite the so many barriers seen across bridges in Lagos and across the country?

ThrowBack: See When Saraki Named A Road In Illorin After Rapper, Jay-Z