Tipper lorry drivers from the Progressive Tipper Garage along the LASU-Ojo Road in the Ojo Local Government Area of Lagos State have protested the alleged extortion and seizure of their vehicles by some officials of the state Ministry of Transportation.

It was gathered from the tipper lorry drivers that the ministry officials in charge of towing abandoned vehicles, were impounding their tipper lorries that were still in good conditions and taking them to the Vehicle Inspection Service office in Alausa, Ikeja.

One of the drivers, Sharafah Olabisi, said that his vehicle was towed away at midnight from where it was parked, adding that the engine and gear were damaged in the process.

Olabisi stated, “Sometime in March, it was too late for me to deliver a tipper lorry load of sand to a customer. So, I parked the vehicle at the Almaroof filling station on the LASU-Ojo Road and went home to relax. I received a distress call from those at the garage around midnight that my vehicle had been taken away. I don’t know how they were able to move the lorry. They damaged the engine and the gear. I just finished the repair. 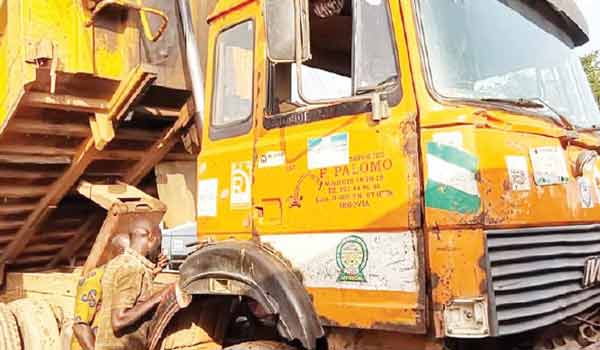 “The officials usually take the vehicles to Alausa and ask the drivers/owners to pay to get them back. We’ve been afraid to speak up all this while. They just come around anytime and randomly pick vehicles. I paid N250,000 to get my tipper lorry out of their office after which I spent N650,000 to fix the damage caused to the vehicle.”

He said, “On May 28, 2021, around 4.35am, I parked my tipper lorry to pick up someone on the LASU-Ojo Road. These people that call themselves MoT officials accosted me and dragged me out of the lorry. I kept telling them that I only parked to pick someone and that it was not an abandoned vehicle, but they didn’t listen to me. I wasn’t obstructing traffic in any way. We need your help on this matter.

“They drove the lorry to Alausa. They destroyed the steering wheel and other parts of the vehicle. They collected N150,000 from me before the vehicle was released. Seun is the name of the person in charge of the operation. They usually come with touts to carry out their operations.”

The head of the drivers, Dele Ogunbayo, lamented that weapons were being used by the officials and hoodlums to forcefully collect trucks from the drivers, adding that the team’s operation was suspicious as it only works at night.

Ogunbayo stated, “They come to pick tipper lorries without genuine reasons. There was a driver, who parked by the roadside, because he was feeling dizzy. In five minutes, they accosted him and took away the vehicle and collected N150,000 before it was released. They say they are from the Governor’s Office and that they’re in charge of abandoned trucks.

“They carry out their operations with knives and cutlasses. There is no way you will be able to resist them. They come with operatives of the Nigeria Security and Civil Defence Corps. They don’t work during the day. It’s only at night from around midnight to 4am, and that’s the time we move around with our vehicles. We want the government to come to our aid.”

When contacted, the Chairman, Abandoned Vehicles Committee, Tunde Ige, said that he was not aware of such an operation, adding that he would investigate the incidents.

“I am hearing this for the first time. We have always acted on any complaint we receive. It is not part of our responsibilities to go and remove vehicles from where they are parked. Please send me information about the vehicles and I will investigate the matter,” he told our correspondent.