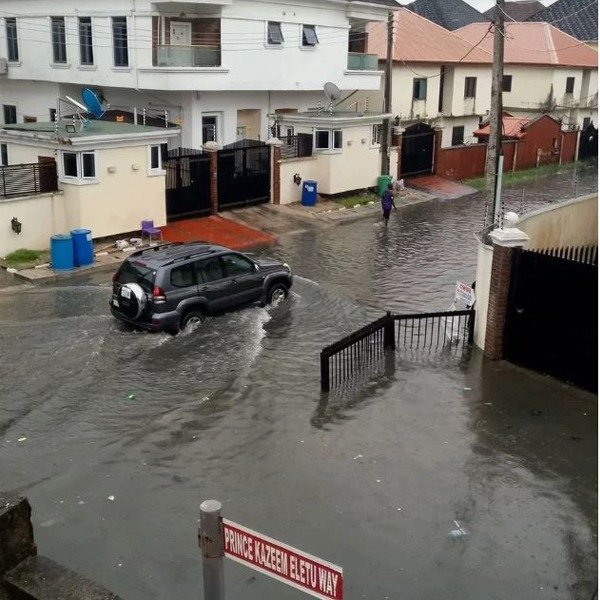 The area in Lagos known as Lekki is generally considered as the face of economic prosperity in Lagos.  Lekki features a plethora of nice houses, upscale shops and businesses, upwardly mobile residents and a general air of optimism.  However, residents of that location equally have their challenges just like every other part of Lagos. For instance, Lekki residents are not spared of motoring challenges.

Here, we highlight some challenges that car owners in Lekki often encounter in that axis of the state.

Note: For the purpose of this article, we will be referring to the areas that span from Lekki Phase 1 all the way to Sangotedo as Lekki.

During the rainy season, Lekki is one of the most flood-affected areas in the country. The severity of flooding often causes some residents to temporarily relocate from their homes. Typically, these persistent floods leave the roads in Lekki inaccessible or hard to navigate by motorists.

As a result of the perennial flooding in the Lekki axis, cars of residents in flood-prone areas are likely to have water find its way into sensitive components of cars. Also,  fuel stations with underground storage tanks can be contaminated with floodwater, when patronized can cause damage to cars.

Over the years, the Lekki axis has grown in leaps and bounds. The population of residents has surged tremendously, so also has motoring activities. Due to the limited access and arterial roads into and out of Lekki, this often creates huge traffic lock-jams with the attendant traffic queues spanning out of proportion.

A good number of roads inLekki, especially private residential estates, are paved with interlocking tiles. This makes road maintenance easy and budget-friendly. However, the downside of interlocking tiles is that driving on it, especially at deteriorated sections, over a period, can cause damage to the component of a motorist’s car suspension.

The toll gate has been one of the major complaints of motorists in the Lekki axis. Often, the slow attendance to motorists at the Toll plaza often leads to a long queue of motorists waiting to be attended to.  The terrifically poor and narrow condition of the alternate routes has done little to help matters.

Due to the insufficient arterial roads into and out of the Lekki, that part of the state has become notorious for inordinately slow traffic. Several efforts by the successive state government to ameliorate the situations have been largely unsuccessful. Flyovers have been built, roundabout constructed and demolished,  the expressway has been expanded, etc. Yet, not much has been achieved from all these in terms of traffic reduction. Valuable man-hours are wasted in the slow Lekki traffic.

A Ferrari 488 GTB Gets Destroyed After Bashing A Bus (Photos)