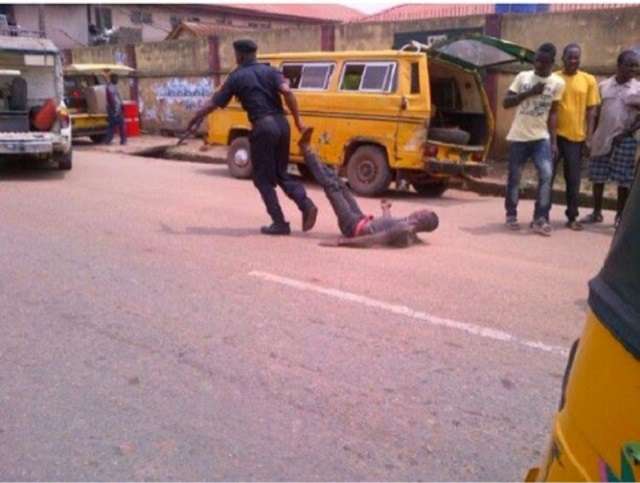 The activities of the special police unit are now trending on social media » . Hundreds of people are narrating their  experiences with SARS operatives.

If the tweets are anything to go by, you could get arrested by SARS for looking or dressing some type of way. The reasons range from the ridiculous to the unbelievable.

Pulse has compiled a list of ten things that shouldn’t get you arrested by SARS but still do. You can read them below;

Tattoos are works of art and harmless fun but SARS use it to profile criminals. Having a tattoo or tattoos would most likely make you a suspect in the eyes of SARS officials. These law enforcement officials seem to believe only criminals have tattoos.
If you bump into any of them and have a tattoo you are going to be in big trouble. The chances of being arrested and interrogated are pretty high.

Having a laptop shouldn’t be a big deal but for SARS operatives it is another indicator that you are into Internet fraud. The mere possession of a laptop would get you into serious trouble with SARS operatives.
If you do not have a receipt for the laptop then you are in big trouble which might land you in a prison cell. SARS officers don’t believe ordinary citizens should own laptops.

5) Possession of a mobile phone

In the 21st century, everyone should have a mobile phone. The men of the SARS don’t seem to think this way. Once they stop you in public, the next thing is to ask for your phone and search it with no warrant. The more expensive your phone, the bigger the trouble you are in. You could be called a cultist or Internet fraudster once they go through your phone.

If you are young and have a car, trust me, SARS will you pull you over several times and search it. There are unconfirmed stories of SARS operatives planting incriminating objects in the cars of innocent Nigerians to get them arrested.

It’s not only men that get wrongly profiled by SARS, women too are victims. Thanks to the anti-SARS Twitter thread we’ve found out that these policemen pick on women too. Their style is to harass women who they think dress like prostitutes. These unlucky women are thrown into vans for interrogation or a ride around town.