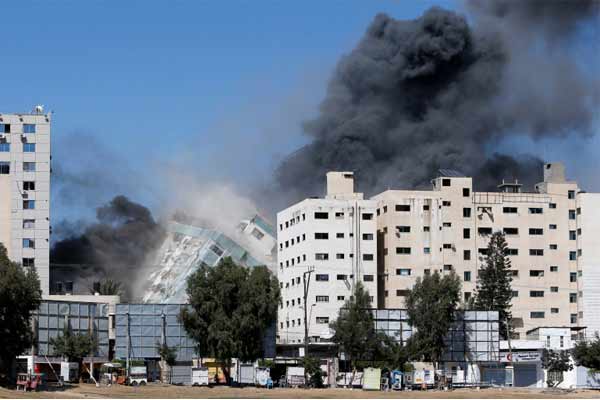 An Israeli airstrike in Gaza has destroyed a tower block in the city housing the offices of Al Jazeera and the Associated Press (AP).

The building was home to several other media outlets and offices including several internet providers, and private apartments.

The Saturday airstrike is the sixth consecutive day of hostilities between Israel and Hamas.

It occurred after the Israeli military telephoned a warning that the strike was imminent within an hour.

Three heavy missiles struck the 12-story building, collapsing it in a giant cloud of dust, according to the Associated Press.

The Associated Press president and CEO, Gary Pruitt, said he is “shocked and horrified” by the “incredibly disturbing” Israeli attack.

“The world will know less about what is happening in Gaza because of what happened today,” he said.

“We are shocked and horrified that the Israeli military would target and destroy the building housing AP’s bureau and other news organizations in Gaza.”

“This is an incredibly disturbing development,” Mr Pruitt said, noting that “AP is seeking information from the Israeli government and is engaged with the U.S. State Department to try to learn more.”