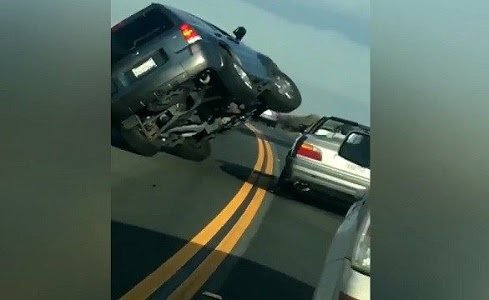 Two drivers will face charges after engaging in an apparent road rage incident that resulted in a rollover crash.

It’s unclear what led to the incident, but the video shot by another driver shows a man get out of his BMW and walk towards the Ford Escape behind him. It appears words were exchanged between the two, and as the first driver walked back to his car, he allegedly spat on the SUV.

The Ford Escape then made an apparent attempt to pass the car on the left, but instead drove up the side of the BMW and tipped over. The BMW fled the scene following the incident.

Here is a perfect case of why you should always try to keep your cool in traffic no matter what happens, and that includes being directly provoked by another driver.

Again,in comparison to smaller cars with lower centers of gravity, most SUVs don’t handle themselves so well. Just make sure you weigh your odds when buying.What do you think?

Dear “Molues”, We Will be too Happy to Miss You!