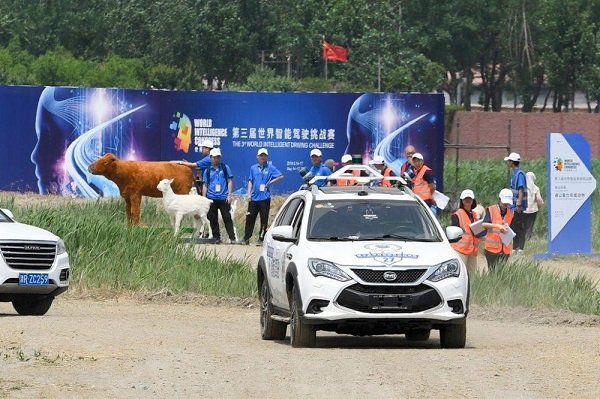 China held a driverless car race competition in the city of Tianjin, during their Third World Intelligent Driving Challenge.

China is a country where technology and innovation is a commonplace. We should not just be surprised whenever they try out unusual things like this. It is good you know the Chinese are putting in much effort as the global race to gain the lead in technology heats up.

They got bored of the conventional car race we all know and went for something different. They decided to race driverless cars; everything a driver could possibly do while racing were left to the mercy of a computer with its numerous sensors.

Several self-driving cars contested and it was all fun watching them race for glory. On a circuit covering an area of 10 soccer fields, they navigated through bumps, sudden turns and artificial fog. Even fake cows and sheep suddenly crossed their paths for good measure. Some teams wreaked less havoc than others.

The competition was organized in a bid to spur China’s autonomous-car efforts, and also highlight how nascent the technology is.

“The invention of automobile changed people’s perception of time and space,” Li Deyi, chairman of the Chinese Association of Artificial Intelligence, said at the event’s opening ceremony on Wednesday. “The current revolution will change the nature of cars and make it more than just a transport tool for human beings.”

The team from Tsingshua University won the contest and Beijing Electric came second.

Luckiest Person In The World: Detached 22.5 Inch Trailer Tyre Crashed In To A Peugeot