The current first lady of Sierra Leone, Fatima Bio has been spotted in a Toyota Land Cruiser as she visited the wives of the policemen in the country. The meeting focused on appreciating the women for their supports towards their husbands.

During the visit, the wife of the President reiterated the commitment of the government to the well being of the association. The video saw the first lady alighted from behind the wheels of the Toyota Land Cruiser.

Meanwhile, the First Lady H.E. Fatima Bio pledged Le 150 million to the Sierra Leone Police Wives’ Association in the course of the meeting.

Video Of Fatima Bio Arriving At The Event

Mrs Sovula further advocated for the provision of boreholes and hand pumps for all police barracks in Sierra Leone. This would serve as a preventive measure of sexual and gender-based violence. She committed her institution’s support to the First Lady’s ‘Hands off our girls’ initiative. 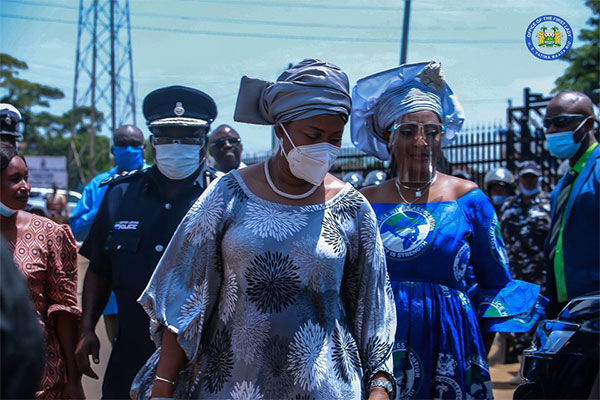 The Toyota Land Cruiser is a series of four-wheel-drive vehicles. It is produced by the Japanese automobile manufacturer Toyota. It is Toyota’s longest-running series of models and the second-longest SUV in production behind the Chevrolet Suburban.

The Land-Cruiser features a spacious interior with a list of premium optional upgrades. All these, coupled with a beastly 381HP 5.7 liter engine.