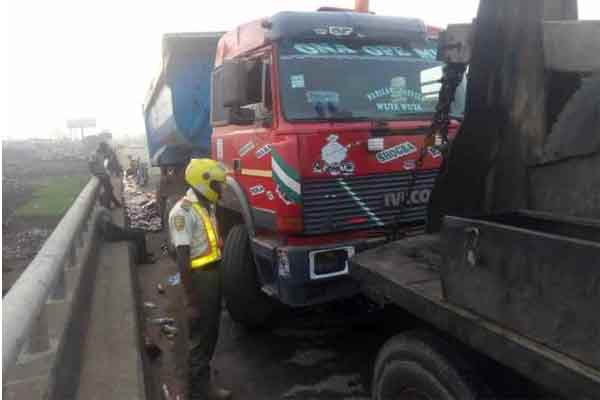 Four persons narrowly escaped death in the early hours on Saturday, when the driver of a truck fell asleep while on motion along Lagos-Ibadan Expressway.

According to an eyewitness, the incident happened at about 6.15 am, at Kara Bridge, inbound Lagos of the road, when the driver rammed into a stationary vehicle.

The vehicle involved are VOLVO truck white and red with registration number: GBE 454 ZC and IVECO truck, white with no reg number.

It was gathered that the Volvo truck driver slept off behind the wheels while in motion and crashed into a brokendown truck in the process.

Though, there was no loss of life, four persons were severely injured and later rushed to hospitals. The situation has resulted in griclock as the truck emptied it’s contents on the road.

At press time, evacuation exercise was on-going by emergency responders including men of the Federal Road Safety Corps, FRSC, Motorists and other road users were advised to exercise patience along the route as FRSC men, and other rescue agencies on ground are directing and maintaining easy flow of traffic.