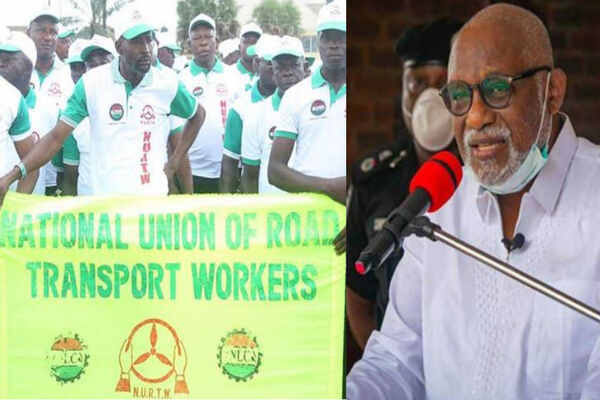 Governor Akeredolu of Ondo suspends NURTW activities in the State indefinitely after a member was shot dead during clash.

Governor of Ondo State, Oluwarotimi Akeredolu has suspended all activities of the National Union of Road Transport Workers (NURTW) in the state till further notice. He has also ordered all members of the union to immediately vacate all motor parks across the state.

This came after one person died in a renewed clash between factions of the union in Akure, the Ondo State capital.

The victim’s name is Ademola Ademoyegun Shina while Adeyemi Samuel Ojuyobo and Akinyemi Bayo suffered injuries in the process.

The deceased is a member of the union whose name is Shina. Report gathered that he was shot during the fraca.

The unionists had this morning caused pandemonium around oja oba area, on Adesida Road. They were shooting sporadically while residents and traders scampered to safety.

This came barely 48hours after the factional unionists fought at Owode area of the state, injuring many people.

As of the time of filing this report, Vehicular movement has been disrupted along adesida Road. Meanwhile, business activities around the area have also paralysed due to the incident.

Recall that Akeredolu suspended the operations of the National Union of Road Transport Workers (NURTW) and the Road Transport Employers Association of Nigeria (RTEAN) which he said it would only last for two weeks in the first instance.

Governor Akeredolu said the two weeks was to allow both unions meet and settle their differences to avert blood bath.

He however said the meeting of the unions was secondary to him. He said this because his primary concern was to protect citizens of the state.