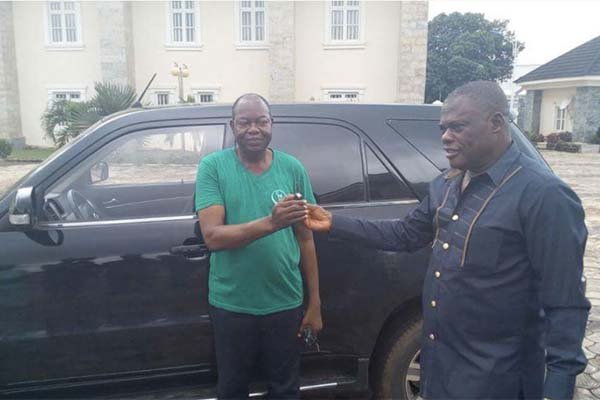 Last Saturday, July 22nd the Chairman of Innoson Vehicle Manufacturing Company Ltd, Chief Dr Innocent Ifediaso Chukwuma OFR gave out a brand new Innoson IVM G5 to Mr Ikechukwu Osakwe popularly known as Osabros who prophesied to him in 1979 that he would be the first man in Africa to manufacture vehicles and sell to different African countries.

The prophecy was given at the period the then Innocent Chukwuma could not boast of a car, talk less of manufacturing one. According to Dr Chukwuma during the presentation of the car, he recalled on how Mr Ikechukwu Osakwe all the way from Kano blocked him at the front of his house early in the morning and told him he has a message for him.

Mr Osakwe went on to narrate a dream he had about him, how he saw in the said dream his vehicle manufacturing company known as CAP PLC. “He told me that CAP means Chukwuma Automobile Productions. Immediately he said that, I laughed him to scorn and left him immediately.

After some years when I established the first motorcycle assembly plant, he came back again to remind me of that dream again and told me that I will still manufacture vehicles. Of a truth it was after I had established my vehicle manufacturing plant that I realized that his prophecy was real.

This week I signed an MOU with TAXI PLUS all the way from MALI to supply about 400 vehicles to Mali and I then recalled that Mr Ikechukwu Osakwe prophesied as far back as 1979 that I will be the first indigenous vehicle manufacturing company to sell cars to other African countries. I shed tears of joy and said this can only be the hand of God. That is why I have invited him to let him know that his prophecy has been fulfilled. I have decided to give him a Brand new IVM G5 SUV and pay him a monthly salary for life. I want to encourage him to keep serving His God”.

The presentation of the vehicle was witnessed by the members of Osakwe’s family, friends and relatives. The presentation was done by Chief Gabriel Chukwuma, (Gabros), immediate elder brother to Dr Innocent Chukwuma who equally was a witness in 1979 when the prophecy was given.

In his vote of thanks, Mr Osakwe expressed gratitude to Dr Chukwuma and further told him that more great things will still happen to him and IVM. He prayed for Dr Chukwuma and told him that the Grace of God that has brought him this far will continue to see him through till IVM becomes a dominant force in Africa.

Mercedes-Benz Is In Search Of Creative Programmers: #MercedesBenzChallenge