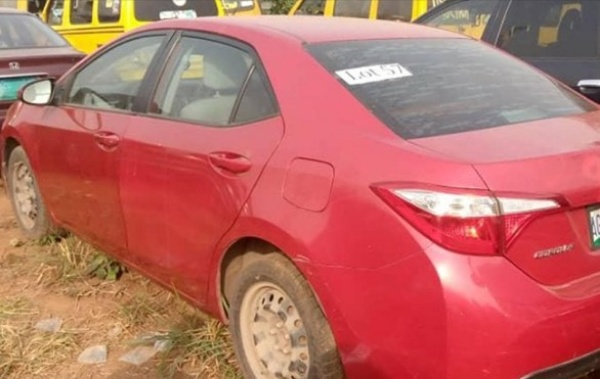 That is twice the market value of a Nigerian used Toyota Corolla sedan which sells for around N3.2 million.

Last week, the Lagos State Government auctioned 83 vehicles seized from their owners in different areas of the state for flouting the one-way traffic law in the state.

The public auction, according to the State government, was to correct traffic offenders, especially those driving against traffic.

“Driving against traffic (one way) has caused a huge number of accidents and untold losses to property and human lives.”

The auction was supervised by the Ministry of Justice and the State TaskForce on Environmental and Special Offences.

All the auctioned vehicles, which were impounded by the state’s task force, were offered to highest bidders. One of the vehicles, a red Toyota Corolla, belonging to a company, went for N6.5 million.

According to reports, the stake for the car kept rising from an opening bid of N750,000 as auctioneers, agents, buyers and the car owner tried to outwit one another.

At the end of the day, the car was sold for N6.5 million. The winning bid was more than double the market price of a Nigerian used Toyota Corolla which sells for around N3.2 million.

Other vehicles auctioned at the event includes a Nissan Murano, which was sold for N1 million; and a Cabster cabin truck for N1,930,000.