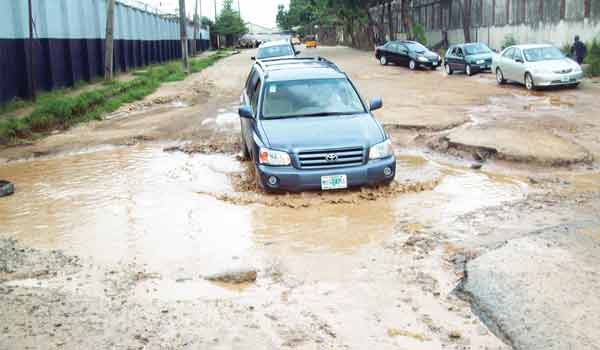 Residents, traders at Aswani Daily Market and workers at Emzor Pharmaceutical Company in Isolo Local Council Development Area (LCDA) of Lagos State have lamented the deplorable state of the access road to the market.

The road, which has been abandoned for a very long time, has become an eyesore as motorists wade through the muddy road leaving their vehicles badly damaged.

The failed portion of the road has also aggravated attacks on motorists who are stuck in the mud at nightfall.

Even pedestrians now find it difficult to navigate the road daily, especially whenever it rains. Some of the road users, who spoke with The Guardian said the bad state of the road had cost them a lot as their goods sometimes fall off while in transit to their various warehouses and shops.

The road, which begins from Five-Star Bus Stop on the Apapa/Oshodi Expressway down to Aswani Market, Mechanic Village, Ajao Estate and environs, used to be over busy but many motorists now avoid it due to deadly potholes and pool of water, making commuting a herculean task.

A tricycle operator, who plies the Five Star – Canoe Bridge route, Pius Olalikan, said the bad state of the road was affecting his business.

He said: “The bad road is damaging my tricycle. I have to visit a mechanic daily to repair it. I am even thinking of changing routes because I am tired of the road. Let the government rehabilitate this road for us. It will go a long way in improving the lives of people using the road.”

Also, the General Chairman, Aswani Daily Traders Association, Frank Sunday Nwachukwu, said the deplorable state of the road had been affecting traders in the market negatively as trucks and trailers that normally delivered goods to them were no longer coming.

He said: “We are appealing to the Lagos State Government to come and rehabilitate this road because it will help to improve the economy of the state and better the lives of the traders and people living in this area.” 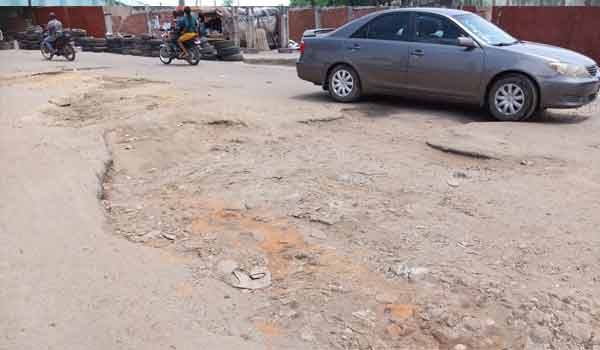 Nwachukwu said Aswani Market is no longer a Tuesday but daily marketplace, therefore, there is need for government to rehabilitate the road to make movement freely.

He stated that there were different taxes imposed on the traders by the government and the traders had been faithful in terms of taxation.

“The dangers the bad state of the road imposes on traders cannot be over-emphasised because trailers and trucks that deliver goods to us sometimes fall down on the potholes. Let the government come to our aid and rehabilitate the road,” he said.

The Executive Chairman of Isolo Council Development Area (LCDA), Alhaji Shamsudeen Olaleye, said as people were worried about the bad state of the road, the council was also worried.

He said sometime ago, some group of people from Emzor Pharmaceutical Company came to the council demanding that the government should repair the road, but the council told them that as a company, they should take part in rehabilitating the road as their Corporate Social Responsibility (CSR).

He said: “Therefore, we engage them in discussion on how to rehabilitate the road; we have been having meetings with them.”

Olaleye added that Lagos State Government had been doing construction works on highways, hence the council could not at the same time close down the road for rehabilitation because it would affect vehicular movement.

He said in no distant time, the council would commence rehabilitation of the road to reduce traffic gridlock caused by the bad state of the road.

But a worker at Emzor Pharmaceutical Company, who spoke in confidence, said there was no official letter from the council asking them to rehabilitate the road.

Would You Buy This 1987 Buick GNX Muscle Car For N114million? (PHOTOS)