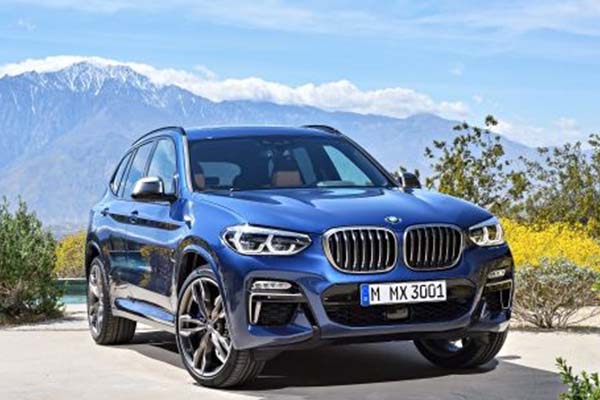 The BMW X3 was the car that launched the mid-size SAV (Sports Activity Vehicle) segment in 2003. Since then, BMW has recorded more than 1.5 million new registrations of the X3 across the two model generations so far. And now the new BMW X3 is set to write the next chapter in this success story with three model variants (xLine, M Sport and Luxury Line trim).

The third generation all new BMW X3 follows in its predecessors’ tyre tracks by combining rugged off-road looks with a sporting presence. Its familiar proportions, including very short front and rear overhangs, shine the spotlight on the perfect 50:50 distribution of weight between the front and rear axle. The potent dynamic intent of the new BMW X3 is highlighted by a chunky kidney grille and foglamps featuring a hexagonal design for the first time on a BMW X model. At the rear, the light clusters (whose three-dimensional look in optional full-LED guise give them considerable visual impact), markedly downward-sloping roof spoiler and twin exhaust tailpipes bring matters to a suitably muscular conclusion.

The interior of the new BMW X3 displays unbeatable fit and finish and material quality, and is even classier and more luxurious than its predecessor. Comfort levels are further elevated by a host of new equipment options like three-zone automatic climate control, the Ambient Air package, active seat ventilation, the cargo function of the standard 40:20:40 split/folding rear seat backrests and the panoramic glass roof that brings extra airiness to the interior and further enhances perceived quality.

Another new equipment item is the optional BMW Display Key, which not only locks and unlocks the BMW X3 by radio remote control, but also shows a variety of status information on the car and serves as the control unit for the optional auxiliary heating, for example. Optimised combination of dynamic sharpness and ride comfort.

Even more efficient line-up of engines and intelligent lightweight design. Two diesel engines and three petrol units will be available from launch (or shortly afterwards) for the new BMW X3. The 360 hp BMW X3 M40i has combined fuel consumption of 34.5 mpg. The BMW X3 xDrive30i produces 252 hp with combined fuel consumption 38.2 mpg. All the engine variants will team up as standard with an optimised version of the eight-speed Steptronic transmission.

BMW ConnectedDrive: semi-automated driving and cutting-edge connectivity. When it comes to the BMW Personal CoPilot features focusing on driver assistance and (semi-)automated driving, the new BMW X3 can be specified as an option with the latest generation of Active Cruise Control and the Driving Assistant Plus safety package, including Steering and lane control assistant, Lane Change Assistant and Lane Keeping Assistant with side collision protection. This extensive line-up of assistance systems puts clear water between the new BMW X3 and its direct rivals.

The second pillar of BMW ConnectedDrive – alongside the BMW Personal CoPilot driver assistance systems – is formed by BMW ConnectedDrive Services and apps. As a result, the new BMW X3 now also features BMW Connected. Working on the basis of a flexible platform, the Open Mobility Cloud, this new integrated digital concept for enhanced personal mobility uses various touchpoints (such as smartphones and smartwatches) to integrate the car seamlessly into the user’s digital life. This means, for example, that it can transfer mobility-related information, such as addresses from calendar entries, from a smartphone into the car, enter them automatically as destinations into the navigation system and calculate the optimum departure time for the journey.

Gesture control allows various navigation and infotainment system functions to be operated intuitively using finger and hand gestures. Meanwhile, the likewise optional Voice Assistant lets the driver use everyday language to have their requests turned into the appropriate actions instead of having to use set spoken commands. And the optional Head-Up Display enables the most important driving-related information to be projected directly into the driver’s field of vision. The Head-Up Display in the new BMW X3 is unrivalled in its segment for graphics, resolution and display options.

Tell us what you love most about the new BMW X3