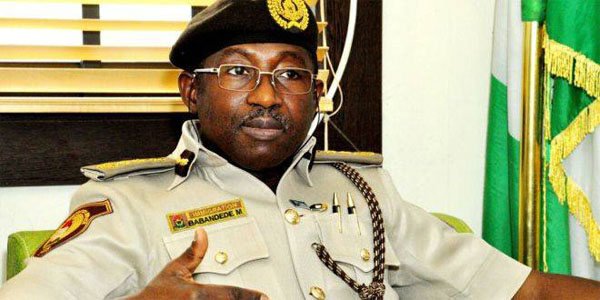 The system would automatically detect and raise the alarm if any of the violators applied for passport re-issuance, Babandede explained.

The NIS boss made the clarification following concerns that the violators whose passports had been seized might attempt to obtain new passports and sneak out of the country.

The affected individuals had been placed under six-month travel ban by the Federal Government with effect from January 1.

The CG said, “It is not possible for them to apply for new passports. This is because we have passed that level in the Nigeria Immigration Service. The system will not re-issue the passport even if they lost their passports. Even if they want to change them; it would never work.”

Meanwhile, Babandede has directed NIS formations to enforce the travel ban imposed on 100 travellers. They were alleged to have flouted the mandatory seven-day post-arrival COVID-19 polymerase chain reaction test.

He said the defaulting passengers had been restricted for six months, from January 1 to June 30, 2021. This is in line with the Federal Government’s directive.

The affected passengers had been notified and would be prevented from passport re-issuance. They are so restricted from travelling outside the country during the period. This information was contained in a statement by the CG on Monday, the NIS Spokesman, Sunday James, said.

The Secretary to the Government of the Federation and Chairman of the Presidential Task Force on COVID-19, Boss Mustapha, had announced the sanction on the travellers in a memo titled ‘Travel restriction,’ released by the Federal Ministry of Information and Culture, on Friday.

According to him, the six months’ travel restriction was based on “presidential authority.”

The NIS in its statement warned the affected passengers to comply with the directive to avoid breaching public health protocols and refusal of departure.

It said, “The 100 defaulting passengers have been restricted for a period of six months, from January 1, 2021 to June 30, 2021. All the affected passengers have been notified and will be prevented from passport re-issuance and travelling outside the country during this period.”