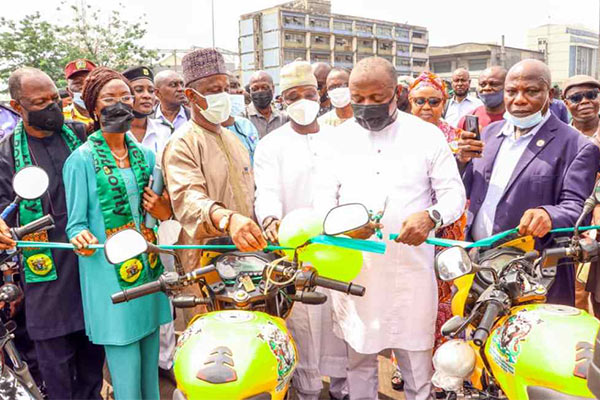 It said the move will ease the frustration and delays experienced by firms and persons doing business at the ports.

It follows the introduction of an electronic truck booking system on trucks doing business at the port.

Managing Director of Nigerian Ports Authority, Mr. Mohammed Bello Koko, has restated the Authority’s resolve to eradicate traffic gridlocks around all port locations in the country to ease the frustration and delays experienced by firms and persons doing business at the ports.

Bello Koko represented by the Authority’s Executive Director Marine & Operations, Hon. Onari Brown, made these remarks at the unveiling of 24 new motorbikes to strengthen traffic monitoring and enforcement along the access roads to the Lagos Ports Complex and Tin-Can Island Port.

The Authority last year introduced an electronic truck booking system that imposed scheduling restrictions on trucks doing business at the port, and in partnership with the Lagos State Government began an enforcement campaign against indiscriminate parking of trucks along the port access roads.

As the landlord and technical regulator of the port, the NPA Managing Director at the event again assured port operators and users that the Authority will continue to deploy innovative measures towards the elimination of all encumbrances preventing free movement of trade along the access roads to the port.

He commended the Lagos State Government and its agencies for the support provided to restore sanity on the roads in Apapa and its environs, just as he expressed his delight with the progress achieved since the introduction of the electronic call-up system for cargo trucks.

The Authority, he affirmed, has seen an improvement in the evacuation of cargo from the terminals to the hinterlands, while travel time to and from the port has equally improved.

Earlier in his address, NPA’s General Manager Security, Mohammed Khalil, stated that the concept of the “Eto” call-up system, introduced by the Authority in 2021 has revolutionized cargo delivery and evacuation at the nation’s seaports.

Khalil enthused that the launch of the motorbikes would complement the gains achieved following the introduction of the e-call up system for trucks which has proven to be a solution to the perennial gridlock from Ikorodu road into Apapa.

He explained that arrangements have been made with respect to rules of engagement or standard operating procedures (SOP) for riders of the motorbikes, along with the necessary logistics and technical support, towards successful traffic monitoring and enforcement.

She said the launch of the motorbikes would improve traffic monitoring from Ijora, through Sifax Inland Container Terminal up to Mr. Biggs, linking Apapa to Tin-Can Island Port corridor. According to her, the introduction of motorbike patrols would further enhance safety and security at the nation’s two busiest seaports.

Giwa said that as Landlord to the Nigerian Ports Authority, Lagos State is willing and would continue to partner with NPA to eliminate traffic congestion and travel delays being experienced by residents and business owners in Apapa.

“This is our first collaboration with the NPA and it has been successful. I can assure you that the Lagos State Government would do more to support your initiatives. However, to whom much is given, much is expected”, he added.

Spirit Of Ecstasy Redesigned For Most Aerodynamic Rolls-Royce Ever