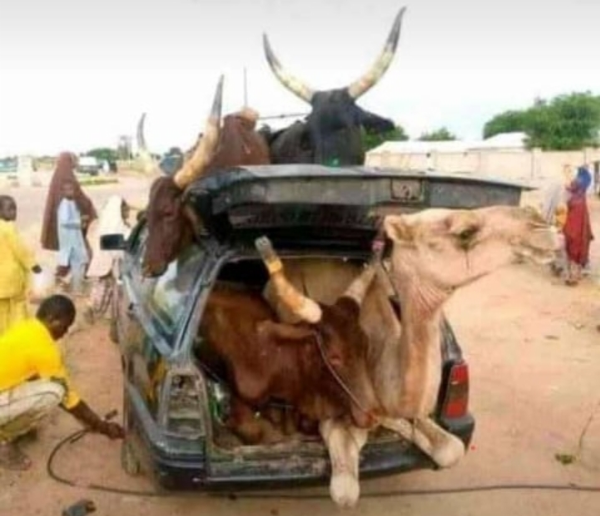 Photo Of The Day : Vulcanizer tries to pump the tyre of a Station Wagon crammed with several cows and camels.

Exceeding a vehicle’s recommended payload capacity will not only damage its suspension, but will also make it to be less stable and more difficult to steer.

But this advice are never a concern to transporters in Nigeria, especially those that ferries large animals to slaughter houses or to other states — and this lone picture taken in the Northern part of the country which clearly defines what the Whites calls “Animal Cruelty” is a proof.

In the picture, several live animals consisting of grown cows and camels were seen crammed into the luggage area of a Station Wagon.

At least, three other ‘distressed’ cows were also seen fastened atop the Station Wagon. The lone picture shared was likely taken by a shocked onlooker as the driver tries to pump the deflated tyre of the wagon.

Max Verstappen Of Red Bull Won 2021 Formula One World Championship, Here Is The List of Past Winners