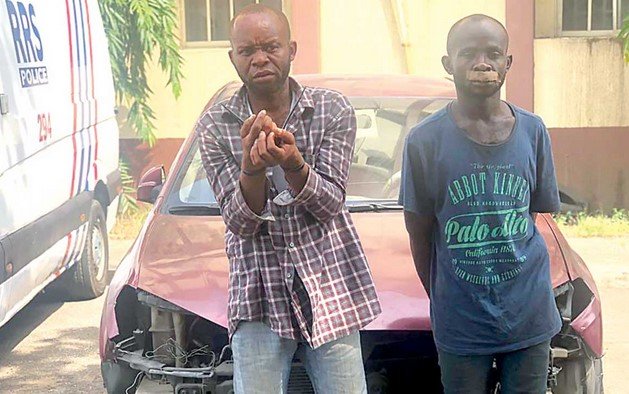 A unit of Lagos State Police command known as Rapid Response Squad (RRS) using their operatives have arrested two men suspected to be the robbers linked to the killing of an Uber driver and stealing his Hyundai Elantra car with registration number EPE 676 EC.

The arrest followed a directive from the new state police boss, Zubairu Muazu to the Commander of RRS, Olatunji Disu, that the culprits should be fished out and made to face the full wrath of the law.

The two suspects whose names are Humble Peter Robert, 33, and Gideon Achibong, 36, were arrested on Monday, February 4, 2019 in Aboki Estate, Lekki, Lagos, while removing the car parts for sale to a scrap metal dealer.

Investigations by the police revealed that Peter Robert, an ex–convict and a bus conductor, in company of three others now at large had three days before his arrest conspired to hijack a Uber car and sold it off.

On the said day, the four suspects, Emma, David, Dolapo and Peter–Robert at around 11pm waved down the deceased, Sunday Obasi in Lekki. They told him they were going to Ikate and he charged them N1,000.

Before getting to their destination, the suspects told the driver that they wanted to urinate. It was at this point they descended on the driver. They killed him and pushed him out of the car into the road before driving the car to Beach Road, Lekki, where they hid it for two days while looking for buyer.

According to Peter–Robert, “I was sitting in front of the car with the driver. We seized and hit him with stones several times. He complained that he was sick. We pushed him beside the road and went away with the car, a wine colour Hyundai Elantra.

You may also like: 8 ways to prevent Uber drivers from ruining your Uber business

At the Beach Road, Lekki, where we parked the car, we swapped the number plate of the car with a Volkswagen Passat car (FKJ 708 CA) close by. We left it for two days hoping to contact buyers for the car.”

He continued; “Emma, also a UBER driver, is our ring leader. He noticed that the driver was operating offline before deciding that we hijack the car from him. The following day when one of us visited where we hijacked the car. He noticed the guy’s remains was already in police body bag.’

‘We contacted Archibong to assist us in disposing off the car. The buyers we invited indicated that they could only buy the car parts. It was in the process of dismantling the car that RRS patrol vehicle spotted us and arrested two of us. Emma, Dolapo and David are on the run.”

Related Topics:Crimerobbersuber driver
Up Next

Lagos Presidential Campaign: Parked Container Trucks Are Back On The Roads (PHOTOS)