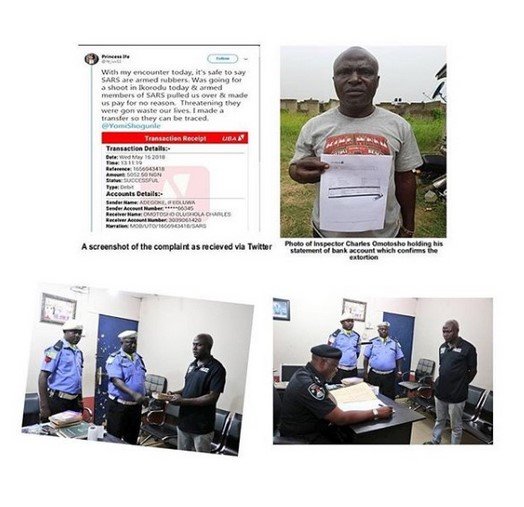 A SARS official by the name Charles Omotosho has been finally sacked for extorting a civilian and road user the sum of N5000 in Ikorodu, Lagos state.

The operative of the Federal Special Anti-Robery Squad (FSARS) was sacked after his extortion activities came to light following tweets from Princess Ife, who on May 16, claimed that Omotosho threatened to shoot at them, except they paid a ‘ransom’ of N5000.

“With my encounter today, it is safe to say SARS are armed robbers. Was going for a shoot in Ikorodu today and armed member of SARS pulled us over and made us pay for no reason. .
.
Threatening they were going to waste our lives. I made a transfer so that they can be traced.”

The SARS official was handed a sack letter three months after the Public Complaint Rapid Response Unit (PCRRU) of the Police Force promised to investigate the issue and make findings of the investigation public.

PCRRU announced the dismissal of Omotosho on Tweeter. It reads;

This should serve as a deterant to other corrupt SARS officials.