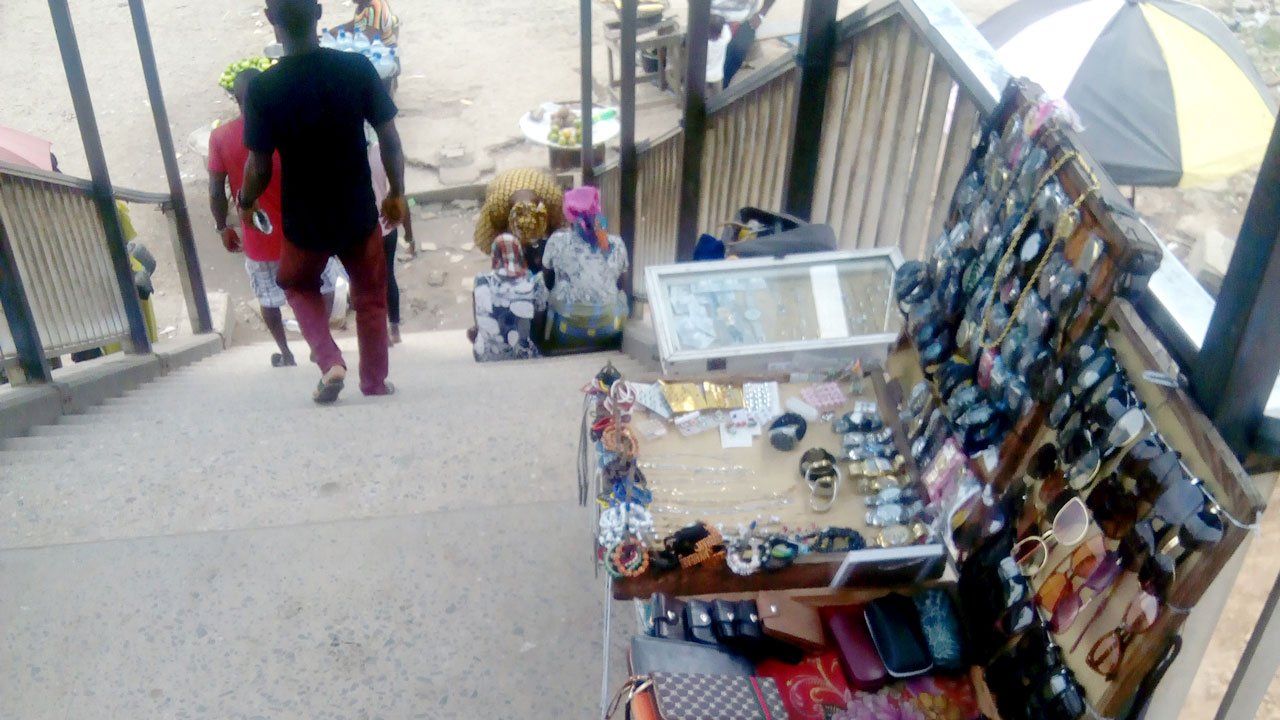 In a bid to survive the harsh economic climate in the country, many traders have converted pedestrian bridges in Lagos to stalls, where they display and market their wares daily.

For instance, along the Oshodi-Apapa Expressway, at least three of these bridges suffer this fate. They include the one at Ilasa; that located at Five Stars (Aswani) Bus Stop, as well as the one located at Charity Bus Stop, Oshodi where massive construction works are ongoing at the instance of the state government.

On these bridges, hawkers, not brazenly display their wares, but also engage in competition for buyers’ attention, while in the process hamper the bridge users movement.

Right from the staircases of these bridges and even under them, pedestrians are treated to a display of various items, ranging from clothes, belts, shoe polish, to food, snacks, and soft drinks.

You may also like: The New And Only Pedestrian Bridge In Benin-City Finally Opened For Public Use

Apart from the hordes of traders, physically challenged persons and sundry characters that solicit alms have also made their presence felt on these bridges, where they also jostle to make quick money from users o the bridge.

For example, in addition to the volume of commercial activities that happen on top of the footbridge at Charity Bus Stop, which is directly in front of the Royal Exchange, a small market has even cropped up at the foot of the bridge, where traders display wares including household utensils, fruits, clothing and food items.

At the opposite end, ascending the bridge from the Nigerian Armed Forces Resettlement Centre (NAFRC) side poses similar problem, as the traders have lined up food items, including snacks, potatoes, plantains, groceries and beverages, while a daring trader even went on to display her t-shirts on the railings of the bridge.

On weekdays, trading activities on the pedestrian bridge at Aswani Bus Stop is light. But on Tuesdays, (the main business day for Aswani Market) the place is completely taken over by traders Not only is the bridge jam-packed, on these days, traders equally take over a stretch of over 100 metres around the foot of the structure on either side.

At Ikeja Along Bus Stop, which is a very busy spot as it serves as a transit point to many parts of Lagos, traders capitalise on the heavy human traffic here to make brisk business.

On both sides of the footbridge, hawkers carve out a large area to sell wares to passersby.

Under the step on the Ikeja side of the road, one enterprising trader even put up makeshift stand to sell items, including GSM lines and cards to people.

On the bridge itself, a physically challenged man sells men’s belts, while another one sells Hausa caps. Still on the bridge, another young deals on necklaces, wristbands, rings and sundry trinkets.

Often, two beggars position themselves on either side of the bridge, where they are occasionally seen sweeping away dirt generated by the traders, while also soliciting alms from pedestrians.

You may also like: See Typical Pedestrian Bridges In Lagos State (PHOTOS)

Another physically challenged person who trades on the bridge told The Guardian that he prefers to trade rather than solicit alms.

On the choice of location, he said he prefers to trade on the footbridge because touts and other acclaimed local government agents, whose identity is suspect do not harass him for ticket payments and other such payments.

The pedestrian bridge at Ketu is fast becoming a beggars’ colony just as commercial activities on and around it remain thriving.

When The Guardian visited the location, five beggars were on the bridge, six on the stairs and about a dozen under it.

An ever-busy transit point for commuters heading towards Mile 12, Ikorodu, the hawkers in this location focus more on selling to passengers in vehicles that make stopovers at the Ketu Bus Stop, or those alighting from vehicles.

The situation in Ojota is slightly different. Traders and hawkers here have turned the older of the two footbridges to dumpsite. Under one side of the bridge, a refuse heap grows taller by the day.

However, there are no commercial activities on this bridge, but sellers are busy selling items ranging from snacks, bottled water, soaps, fruits, and books among others under the stairs.

A cobbler also positions himself in a vantage position under the bridge, where he makes brisk business.

At the new footbridge in Ojota, only a few hawkers huddled in one corner selling snacks and soft drinks to passersby. But there were no sufficient signs to suggest that the traders were stationary there.

Officials of the Kick Against Indiscipline (KAI) unavailable for comments, but some of the bridge users condemn the action of the traders for clogging up the bridges.

“There is need for government to always ensure that footbridges serve only the purpose they were designed to serve. To ensure this, appropriate government agencies should not hesitate to disperse traders as soon as they begin to gather on footbridges,” said Abidemi Yinka, a civil servant.

Another resident of the state, Ulunna Amakwe, said as far as council officials continue to see bridge traders as sources of revenue, the ugly trend would continue.

“Most of these people you see trading on bridges are paying certain amount of money to local councils to be allocated the spaces they use. In addition to that, they are also paying for tickets daily. Until council officials stop seeing bridges as revenue points, this ugly trend will continue.”

Related Topics:beggarsbusinesslagospedestrian bridge
Up Next

Daredevil Biker Rides On The Pavement Of Jubilee Flyover In Ajah, Lagos