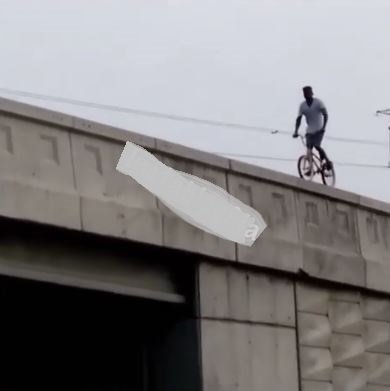 A video that shows an unidentified daredevil biker  riding his bike on the pavement of the popular Jubilee flyover in Ajah have been circulating online.

It’s indeed a daredevil stunt he pulled off there. We can’t ascertain if he did it to draw attention towards himself or if it was a bet. A lot of people saw him pull off this stunt and they helped out by making a video of it.

You may also like: Ray Hushpuppi Proves To The World He Didn’t Rent His Rolls Royce Wraith As People Claimed

As he rides on the pavement, he is seen shaking mildly and for a second, it looked like he was going to fall off, but he kept going till he reached where he wanted to reach.

The video has caused a stir on social media as viewers are stunned by the young man’s action.