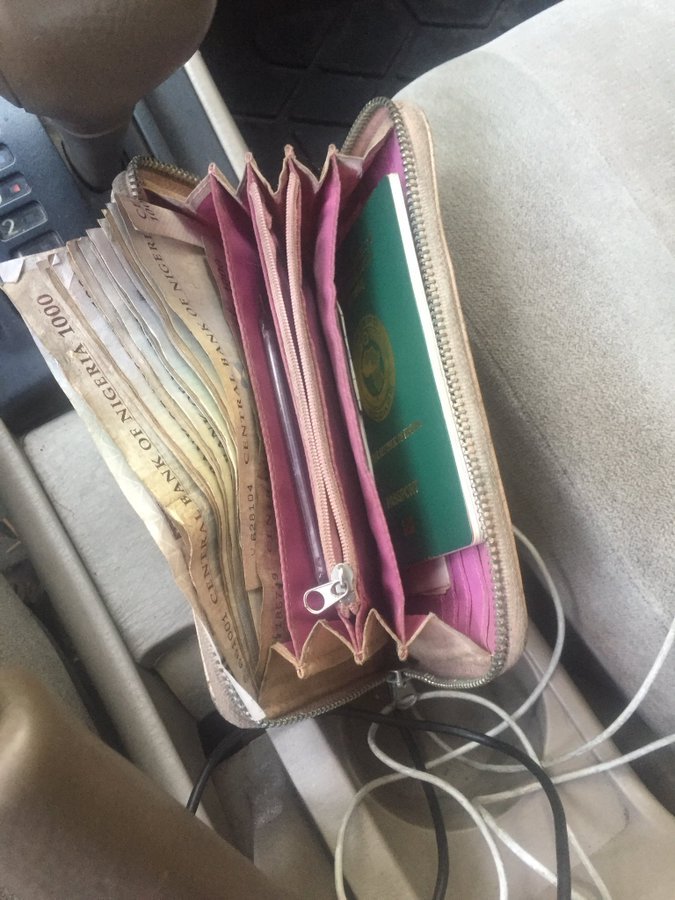 An Uber driver took to Twitter to share his encounter with a lady he helped. According to his tweet, the lady forgot her purse that contained ₦25,000 and her international passport stamped with American visa.

He alleged he drove back to where he dropped the lady to give her back the things she forgot. He claimed the lady gave her just N500 after all he has done for her.

Today a lady forgot her purse in my car, there was N25,000 and an international passport that had an American visa in it.
I drove back to her house to return it and she gave me a N500 tip. Some people are just so ungrateful. 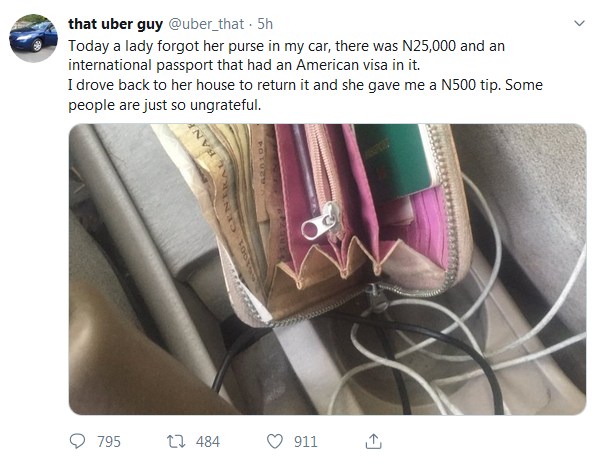 This particular tweet got a lot of Nigerians talking. A lot of people had something to say about the issue.

Below are some of the replies ‘that uber guy’ got;

5. I think you should have just called to inform her and let her come pick it up at the office or where your next ride is…that way you’re happy!

6. It’s probably the much she had to spare
Not everyone with American Visa is well off
But if that’s not the case.. you deserve more than #500 🤷

9. Pray you dont forget anything on this guys uber

10. Yeah we all know that #500 was just too small but bro the moment you expected her to actually reward you then you just threw the reward you should have gotten from the Almighty. Na God reward sure pass, besides there might be a reason for that #500 which is unknown to us

11. Yeah we all know that #500 was just too small but bro the moment you expected her to actually reward you then you just threw the reward you should have gotten from the Almighty. Na God reward sure pass, besides there might be a reason for that #500 which is unknown to us.

12. She should have given you the visa Abi

14. Moral of the story: Don’t do the right things just because you expect a reward, instead be a good person

15. I don’t understand….. She for take her purse give you the money, passport and visa??

16. He could have just told her he will charge her the cost of the fare or she should come pick it up herself. At least that way everyone is clear upfront.

17. I see this as a teachable moment.

Doing the right thing should come at no cost. Especially because this lady actually paid for the ride she ordered. One day, you will lose something and hope someone is kind enough to return to you. Always pay it forward.

18. Yeah you are right. She should have given him like 20k and maybe the American visa.

19. I think ₦500 was too small for a thank you tip. I donʼt care what the money was for whether a loan, school fees, hospital bill or some sort. Dude spent fuel driving to her place, dude called her with his airtime, dude had loss time to please her. She should have done better.

All the 25k? U dont even know if the money was hers or not.

If u wan do good, do good without condition, not expecting something in return, that way u wont feel bad.

Biko If u no need the 500, use am buy airtime for me, i will be grateful

FG Inspects 64 Coaches In China For Rail Projects, 10 Will Be Delivered In June