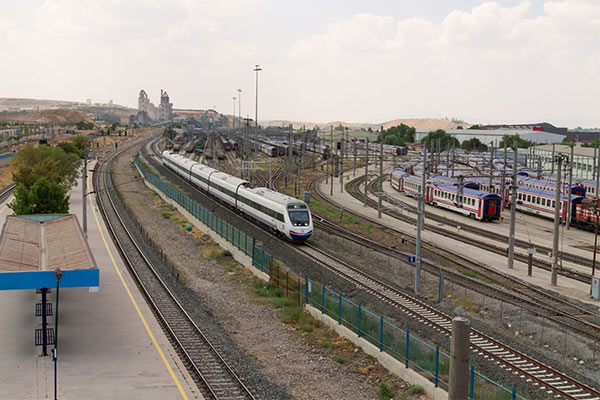 The high-speed rail line will connect the Turkish capital Ankara and a major port in the western province of Izmir.

The United Kingdom has agreed its biggest-ever civil infrastructure export finance deal to underwrite a high-speed rail line between the Turkish capital Ankara and a major port in the western province of Izmir, it announced on Thursday.

The landmark deal was announced at the U.K.-Turkey Green Finance Conference in London.

Turkey’s Treasury and Finance Minister Nureddin Nebati said the deal would have a green loan structure.

“Referring to the Bilateral Cooperation Agreement signed between the U.K. and Turkey in 1999, we have successfully achieved the closing of the landmark financing of Ankara Izmir High-Speed Railway Project under the green loan structure,” Nebati said in a statement.

“We are very glad for the cooperation and strong longstanding relations with the U.K. government and we hope to further strengthen our collaboration.”

“Our shared global outlook on free trade and the environment is the driving force behind economic growth in our two nations,” Trevelyan noted.

“It is fitting that U.K. Export Finance’s biggest ever civil infrastructure deal is strongly sustainable,” she added.

“This is a proud moment for the U.K. railway industry, using its industrial roots to reduce emissions in heavily polluted cities.”

Several contracts worth hundreds of millions of British pounds were expected to be awarded for British-made railway lines, signaling, and electrification systems, Britain said.

Credit Suisse and Standard Chartered Bank are leading the financing of the project.

The deal marks the first U.K.-supported rail transaction in Turkey for over 160 years and forms part of Turkey’s plan to transform high-speed rail in the country.

The new electric-powered railway line will connect Ankara to the Port of Izmir. When complete, the new line will provide a faster, lower-carbon alternative to current air and road routes between the two cities, helping to fulfill Turkey’s climate change commitments made at COP26.

“We have given utmost importance to the environmental and social procedures during this project and as the Ministry of Treasury and Finance, we are closely following the improvements of such issues. We also desire to be among the active and important players of the rapidly growing green finance market,” Nebati said.

Turkey is one of the U.K.’s most important independent trading partners.

The bilateral trading relationship was worth 17.5 billion British pounds ($23 billion) in the four quarters to the end of the third quarter of 2021, increasing by 1.4 billion pounds from the same period in 2020.

The statement said the loan deal will secure major contracts for U.K. companies of all sizes to supply to the project, with several nine-figure deals close to being agreed upon.

Engineering and construction giant ERG International Group is using its close ties with the U.K. supply chain to support the project.

Yoshi Ichikawa, head of Structured Export Finance for Europe at Standard Chartered, said they were “proud to further strengthen our relationship with the Turkish government, providing a loan structured with a clear focus on international social and environmental standards, and working closely with Credit Suisse and UKEF.”

“This support is another in the line of Standard Chartered’s financing in Turkey to help the government deliver its railway infrastructure plan,” Ichikawa noted.

For his part, Murat Dedeoğlu, group CEO at ERG International U.K., said the company was looking forward to strengthening ties with UKEF and the Turkish government in the construction sector and adding value to the economies by making advance engineering and technological solutions available.

How To Make Sure Your Seat Belts Are Working Properly

Drive Pilot : Mercedes Says It Will Take Responsibility When Its Self-Driving S-Class Crashes