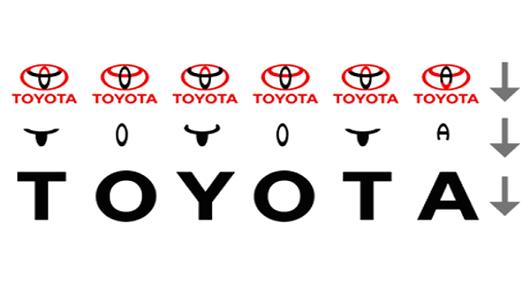 Its raining facts here on Autojosh, we would not rest on our oars to educate you about everything automobile.Today we would be dishing out facts about another automobile giant Toyota .

The company, Toyota Motor Corporation was founded in 1937 by Kiichiro Toyoda .

Its interesting to know that the founder was formerly into textile production ,infact Toyota Motor Corporation started out as a division of Toyoda Automatic Loom Works.Well the company is still in the textile business till this day.

The Toyota logo is not just random oval shapes but it actually spells out T-O-Y-O-T-A .

Check out the image below :

The brand was formerly “Toyoda” just like the founders name , take a peek at their previous logo :

Toyota fully owns Lexus and Scion .They also own stakes in  Daihatsu and Subaru .

In terms of money, Toyota is the 8th biggest company in the world as at 2016 .

In 2013 they broke a world record , they produced more than 10 million cars in one year

The Toyota Corolla has 12 generations and has sold about 40 million(cars) worldwide .

At a time ,as part of publicity for it’s then new corona design, when Japan got its first free way ,They took three cars out for a spin and drove 100,000 miles non stop back and forth between Osaka and Nagoya .

The legendary 2000GT broke all sorts of records , one I particularly love is,it ran 130 mph , for 78 consecutive hours partially through a tropical storm.Now thats wicked !!! , don’t drool over this baby except you have about 500 million Naira .

Its not surprising that they built their first hybrid car in 1968 !! and it used a turbine engine .

Even though they started making hybrids early , the Prius was the first mass produced hybrid from them.And they sold the 1,000,000 th in 1997 .

Toyota developed a complex traffic “app” over 40 years ago.In the early 1970s, the Comprehensive Automobile Traffic Control System featured a control room like you would see in a old sci-fi movie. It practically monitored traffic and let any car with a receiver on their end know which streets were grid-locked, so drivers could  use alternate routes.

This guys don’t just give up.It took 450 prototypes to get the first Lexus right ,and they had to make 50 full-scale clay models .Inspiring !!

They were so successful that Japan had to name one of its cities after them in 1959 .