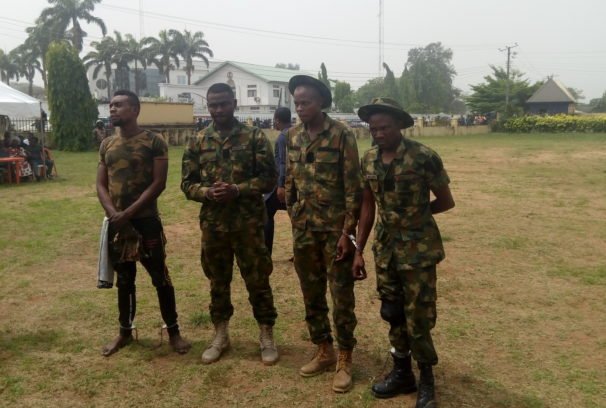 On Tuesday at the Imo sate police command headquarter, five fake Army officers suspected to be fake were paraded.

Brigade General H. I. Bature, who is the Commander of 34 Artillery Brigade, Obinze Owerri, stated this during the signing of the peace Accord/Agreement by the Imo state governorship candidates ahead of the general elections coming up this 2019.

The General said that two out of the five suspects were caught escorting a politician – who he failed to mention the name.

According to reports from Vanguard, the top governorship candidates who attended the peace accord/agreement ceremony, the All Progressives Congress, APC, Hope Uzodinma, Emeka Ihedioha, of the Peoples Democratic Party, PDP and Uche Nwosu, Action Alliance, AA.

On the arrest of the suspected fake Army officers whose names were not mentioned, at the parade ground, the Army Commander said: “You can see, they are wearing the same uniform. You will find it difficult to differentiate them from myself. They are not soldiers. Unfortunately, two of them were caught escorting a politician.

You may also like: On This Day 43 Years Ago, Murtala Mohammed Was Shot Dead In His Mercedes Benz S-Class

“One of them, Kelvin, is not near anywhere close to military formation. We have a way of identifying fake soldiers. The exhibits recovered is unbelievable. I want to sensitize our people that if you are in the habit of recruiting fake Army we will arrest you.”

In his remark, the Imo state police commissioner Dazuki Galadanchi, also said: “Democracy is a game of number. There must be a winner and a looser. Anybody who is not here is not a supporter of democracy. We have only one state and that is Imo state. Our gathering today is to make sure that the election is credible, free and fair. Anybody here and is in Imo state is to serve humanity. Everybody must eskew violence.”

On This Day 43 Years Ago, Murtala Mohammed Was Shot Dead In His Mercedes Benz S-Class (Photos)