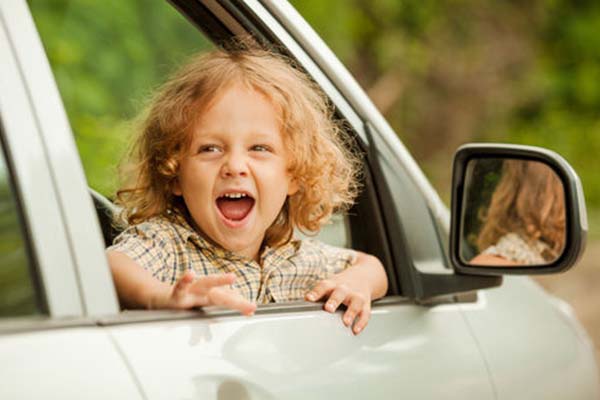 If a child is below 13 years old or not big enough for the front seat, then they don’t have any business seating in the front seat. It’s so sad spotting parents driving with little babies or 3 year old kids in the front seat. Some of these kids even stand up to have a good view of the road ahead when the car is in motion.. Note: It can’t get more cruel than this.

Babies that are below 1 year old should ride in a car seat facing the rear of the car.. They can face forward or backward between age 1-4 depending on which is more convenient. 4-7 year olds should use a forward facing car seat after which they can use the booster seat until age 13.. or when seat belts are good enough for them. In addition, height and growth level also have a role to play so you may not rely on age only.

Let me spare you all this plenty gist and stick to the topic for today.

5 reasons front seats are very dangerous for your kids

1) Airbag may not deploy

The front passenger seat of most cars have a weight sensor that turn on the front passenger airbag if the sensor registers a weight up to 30kg (this figure may vary). So if you have a 20kg kid on that seat, the airbag will be off and an major impact is probably sending that child right through the windscreen.. TOO BAD.. You certainly don’t want that.

2) Airbag may injure or kill the child if it deploys

If the passenger seat sensor senses the child’s weight and the airbag deploys, this may be catastrophic. The front airbags are made to protect adults. They are very powerful when they deploy and this may injure or suffocate the child.

See Related Post Check out this angry Nigerian kid who drove off in his father’s SUV in U.S.A

When we were kids, we used to fit our Daddy’s cloths, shoes and belts.. Guess what, they were always to big for us.. Obviously, you can’t have a child’s car seat in front.. so imagine trying to restrain a 5 year old with the seat belt, it’s either a mission impossible or a suicide mission. It would probably injure them rather than save them.

4) They can fiddle with stuffs and distract the driver

How many times have you yelled at your kids.. “stop that!”.. “don’t touch that!”. They’ll always look for something to touch. That’s their specialty.. then you put them in the front passenger’s seat close to the gear lever, controls on the dash, power window and door switches. Sorry pal, they just can’t stop fiddling with all that.

5) No child lock on the front doors

I got cracked up when I saw 2 kids arguing that the back doors would never open from inside. They grumbled as they clamoured that it’s only Daddy and Mummy’s doors that do open. Little do they know it’s for their safety. A safety feature children who seat in front are deprived of.

You have any to add? Tell us in the comment section.

Check import duty for over 5,000 cars in Nigeria.. https://ojosh.com/import-d

The Ten Most Important Safety Advancements In Automotive History